Pita Bread:  I "accidentally" made little pita breads :).  I finally got around to the Kefir Naan Flatbread recipe.  When I baked the first 1/2 of the batch they poofed out a bit.  It was enough that we split them and put in tiny pieces of reheated stew meat for a snack (mmmm).  So, for the next 1/2 of the batch I added some baking powder to see if it would rise more.  It didn't.  No difference.  They were good though.  I used all white wheat flour.  I may get more rise with 1/2 and 1/2 all purpose but I'd rather not use much white flour.  Uh, or I could use a pita bread recipe ;).  I'll try these a little bigger and make 10 instead of 16. 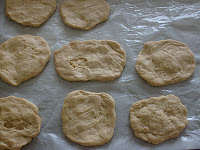 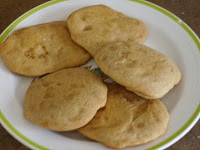 Chicken Lettuce Wraps:  These are so tasty I can hardly stand it!  Basically I just boiled or crockpotted some chicken legs (read: they were on sale although were organic - I couldn't believe how cheap they were!).  Then I shredded the meat and kept it ready in the refrigerator.  When I was hungry for lunch I reheated the chicken in some butter/coconut oil/lard (grease of your choosing - but this really gives it the flavor) with a few strips of onion thrown in and some red bell pepper.  That's it.  No sauce or condiments were needed.  I rolled it up in some organic green lettuce and couldn't believe how good and filling it was.  (the photos are fuzzy 'cuz of my eyes - I really thought they were focused until I saw them on the computer!) 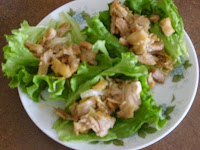 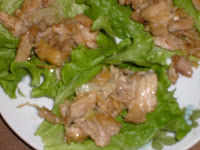 Mayonnaise:  I usually use this recipe with this technique to make mayo.  One dd holds the mason jar while I whisk using a hand-mixer.  It takes forever but is good muscle buildup!  Today I'm trying this technique.  Here is Katie's vlog also and here is Sarah's video. Kelly has a detailed recipe here.   As you can see there are several variations.  I'm secretly glad I accidentally gave dh the Christmas shopping list in late December that had a few of my own listed!  He got me this Hamilton Beach stick blender

(I just noticed that it's $9 off right now).  I've been waiting and waiting to make mayo so I could break it in.  The ingredients are simple:  2 egg yolks, 3/4 teaspoon salt

because that's what I had [I really do NOT recommend using the Coconut oil for this but I was low on any other oils at the time].  I used organic lemon juice instead of fresh because I've seen that recommended (fresh squeezed lemons aren't uniform enough to guarantee what's needed for the recipe regarding acidity - or something like that). My disclaimer:  I'm not recommending that you eat raw egg; on this blog I only share what works for us and you have to make your own decisions.  If you saw Katie's disclaimer at the above link, you know what I mean.  BTW, I only use farm fresh eggs for mayo from trusted sources.  Since I'm, uh, a bit neurotic, I eat it the first day and then let the dc eat it the next day (when I'm still okay, lol).  Fermented mayo didn't work well for me so I just make it regular.  Sometimes with mustard, sometimes without.  Here are the ingredients: 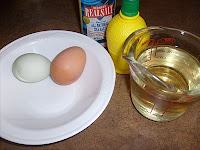 [Update:  It didn't work!  The first time the jar actually had a crack in it so I had to throw everything out, clean up the mess, and clean the blender.  Then I started all over again.  It started to emulsify but I think I went too fast too quickly and it blobbed.  I added another egg yolk but no-go.  I stuck it all in the refrigerator and will use Katie's technique to save it.  We'll see tomorrow...][New update:  because of the coconut oil I used it solidified overnight in the refrigerator.  So, it's not mayo but would make a great sandwich spread, lol.  I'm going to try to save it and emulsify it again using Katie's technique above of pouring it in slowly as I blend it as soon as it liquefies at room temperature (I hope).  The mayo saga continues...][Last update:  This is a botched batch.  We're using it as a sandwich spread as is and I added some onion powder to some last night for salad dressing.]

This compilation of mayo links is part of Kelly's Real Food Wednesday:
http://kellythekitchenkop.com/2011/01/real-food-wednesday-11911.html

Venison Chili:  Dh is cooking up some venison chili as I type.  It smells delicious.  I'm not one to like game (blame it on my early childhood in Missouri!) but I'm trying to stretch myself and stay open-minded :). [Update on this also:  It was very good - A bit spicy for my wimpy palate but very good.  He served it over rice.  The best part was that I didn't have to think about dinner and decluttered a tiny bit.]
What's Schoolin'?
Here are some pictures of what dc chose last week during shelf work time.  Youngest dd used the movable alphabet.  You need to read the long one forward and backwards :).  Middle dd used playdough to make orbitals for Chemistry.  Oldest dd read about children from around the world in this book

.  I don't necessarily fully endorse it but it's what we have.  She also fixed our microscope

.  That got all of us interested in the slides.

I went to Dollar General and got each dd a pretty little notebook for $1 each to log in their shelf work this semester.  I got another for me to log everyone's work.  I've tried different things for record keeping - We'll see how this goes. 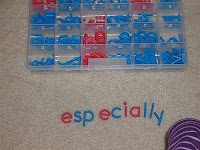 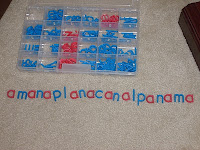 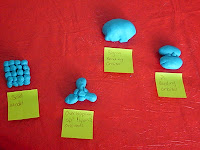 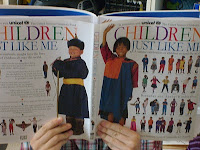 to color a world map according to religion.  It was very interesting.  She color-coded it and went through every card to find the religion info for every country (it's listed as part of each country's facts).  You could do the same for languages or other aspects as well.  We have gotten a LOT of mileage from this card game!
﻿
What's Green?
In my constant quest to challenge myself to be more green (greener?) I actually hit on something.  We use a Swiffer

wet mop for the dc to easily and routinely mop the tile kitchen floor.  I don't want to use the throw aways anymore, nor use more chemicals than necessary, nor spend money (almost $5) on plastic containers (more trash) of wet cloths.  I found a microfiber cloth at the dollar store that has sort of a scrubby side to it.  I think it may have been a "dish cloth" - I can't remember for sure.
First we got it wet, stuck it on the mop, and started mopping.  I told dd that she could spray the floor with one of the spray bottles if she needed to as it dried out.  She never needed to add more water while she mopped.  It stayed wet.  It also got most of the spots up.  Yeah!  It may not look 'pretty' but it works! 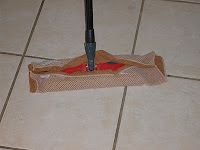