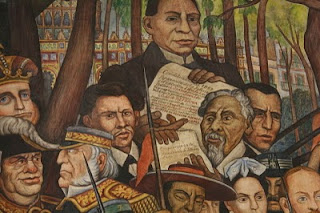 When someone asked for materials for Diego Rivera I felt drawn as if to a magnet to make some 3-part cards.

I don't adhere to his politics and he did some, uh, well, uncool things if you delve into his biography and autobiography.  Definitely preview any material if your dc will be reading online sources or books that I link below.  On the other hand, having seen extreme poverty in Central America and having experienced part of a civil war that could have ended in a communist takeover but didn't (the US and USSR met in this tiny little country during the Cold War), his paintings of the subjugated populations, populist themes, and the civil war/revolution era of Mexico speak to me (although not always in ways he probably intended because I also know of the brutality of the 'winning' side during/after the Mexican Revolution - especially the horrible persecution of the Church and martyrs... anyway...).  His simple yet detailed paintings and murals touch me in inexplicable ways - it taps into my Mayan/Pipil heritage.  He was also a plain fabulous painter and muralist!

Here are some links:

I like this because it's just the art work and mostly in order:
http://pintura.aut.org/BU04?Autnum=11.361

I know, I know, I said I don't go along with his politics but I found this comparison between Socialist Realism and Mexican Muralists very interesting - just disregard the rest of the website:
http://www.marxists.org/subject/art/visual_arts/painting/index.htm

Here are my 3-part cards.  It was tricky finding public domain or fair use images that were kid-friendly.  I chose not to include his cubism period because that is not what he is known for the most.  His murals and paintings are more famous and distinctive.  No selling and for personal use only:

Diego Rivera definitely has a place in studies of Art History that cannot be denied.  He was influenced by and then influenced art in distinct ways.  Some books about Diego Rivera

and
Diego Rivera (Getting to Know the World's Greatest Artist series).