The recipes in Nourishing Traditions

Why bother?  Well... I really hated to hear this a few years ago.  Most cereals in the stores are processed by extrusion.  Even organic cereals.  There are others who can explain this so much better than I.  Back when I was in the deep Lyme Hole I gave my dc cereal even for dinner many times.  I figured it was healthier than a drive-thru burger.  I guess...  Basically the cereal is forced through these teeny tiny holes and it disrupts their molecular structure making it not only not beneficial but actually harmful.  Yeah.  Told you I hated to hear it too!

[Some may feel that there is not enough documented, published evidence to avoid extruded cereals.  I'd rather err on the safe side and have not bought boxed cereals for well over a year.  Correction:  I got some organic cereal last summer when traveling to my in-laws so we could at least eat some with no food dyes amongst the boxes of cereal there.  Another correction:  I haven't checked yet but I just may get some organic puffed rice to make a grotto next week... but those are huge exceptions!]

We usually eat eggs for breakfast.  Otherwise, we may have oatmeal, egg taquitos, bean and cheese melts on tortillas, a banana, or an egg and cheese biscuit.  However, there are some mornings (like today when a repairman was coming in the morning or we're rushing to enrichment) that I can't spend one single second more in the kitchen making breakfast - or rather, I'm in there doing other things - and need to throw something on the table in 2 seconds.  Cold cereal to the rescue!

Here is what I did to be able to make homemade cold cereal without an oven.  Soak your oats the night before.  I put equal amounts of water to oats and add 1/4 C whey.  Usually (when I remember) I add a teaspoon or two of rye flour as well.  The next morning I add more water to cook it.  Basically I add the same amount of water again.  In other words, for 4 cups oats I would add 4 cups water the night before and then another 4 cups water when cooking.  I do it a cup at a time though in the morning so it's not too soupy and then cook it.

1.  Make oatmeal for breakfast one morning even though it's not one dd's favorite and ignore any expressions she may make.

3.  After breakfast is over, add lots of cinnamon to the remaining oatmeal.  Add any other spices that your family likes.  I put a pinch of cloves and ginger last time along with the cinnamon.  Add any sweetener of your choice such as local honey, rapadura, stevia, or maple syrup to the oatmeal and mix it well.  This is also a good time to add any raisins, dried fruit, or chopped nuts to the mix.

4.  Let it cool completely so that you can handle it if necessary without calling 911 and so you won't be putting something hot on plastic or parchment paper during step 5.  I put my pot straight into the refrigerator until it is cooled.  That way I can just get back to it whenever I get back to it.

5.  Spread it out on a dehydrator tray.  Dehydrate until it is completely dry all the way through.

6.  Break it into bite-size chunks.  Some may want to pulse it in the food processor but my dc like it chunky.  Keep in a sealed container either in the cupboard or the refrigerator.  We keep ours in the cupboard.  It is usually eaten within about 3-4 days but has lasted more than a week before.

7.  Enjoy watching the *same* dd enjoy her breakfast of cold cereal with milk (the exact same food she was making faces over) and ask for seconds while she says, "Mmm.  This is good." :) 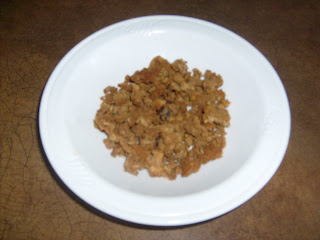 This blog post is part of Kelly's Real Food Wednesday:
http://kellythekitchenkop.com/2011/02/real-food-wednesday-21611.html
Posted by Bamboo at 2:05 PM