I finally took a minute to take some photos of some things I've blogged about recently. In no particular order: 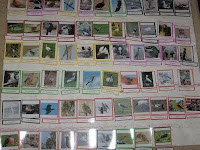 Here is the Birds of the World layout I mentioned in shelf-work choices. Oldest dd was doing it randomly on purpose instead of by continent and wasn't laying the controls next to them but rather picking up as she self-corrected.
Mine look like this but I'm not sure if it's the same seller:
http://tinyurl.com/yfnac6l
They are kept in a cool 3-part card cloth pouch that rolls up. That is in the zoology box on the shelves. I got the directions to make it here but didn't do the little pocket for the labels; we just slip them in with the other cards. Each continent has a pocket in the one I made. Her blog has several pouches so I'm putting several links. Go see and get inspired!
http://montessoribyhand.blogspot.com/2007/03/definition-stages-pouch.htmlcom/2007/03/definition-stages-pouch.htmlcom/2007/03/definition-stages-pouch.html
http://montessoribyhand.blogspot.com/2007/04/who-am-i-cards-and-composers-definition.html 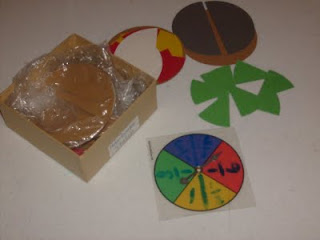 This is the fraction game we like that we call Hamburger Station. Each hamburger 'set' is in a separate baggie in the box. To set up the game each child sorts out their fraction circles from their baggie so they'll be easy to find and put one bun as a base to make their burger. To play, they spin the spinner and take that piece from their own set and start building that layer in a separate place by their bottom bun. When a fraction circle is completed they place it on their bun. The buns are freebies so they start with one and put the top one on at the end. For some reason my fraction games have overhead spinners. Must have been what I had on hand when I made them! 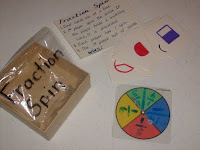 This is a game called Fraction Spin and to be honest I don't think they've ever chosen it. I should take it out to play with them and see how it goes. Here are the directions:
1. Deal cards out
2. 1st player spins the arrow. If the player holds a matching card it is discarded.
3. Each player has 1 spin per turn.
4. The 1st player out of cards wins.

Not a cooperative group game, I admit :).

What's Cookin'?
Here are pictures of the 2 breads I was comparing. The one on the left is the experimental soaked yeast-free bread. The one on the right is our regular sourdough bread. I used 2 different bread pans so that affected the shape/rise. 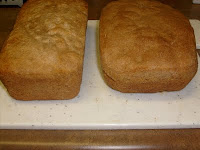 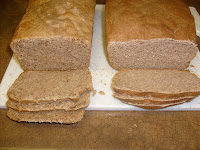 I prefer the texture of the yeast-free bread mainly because I've been having trouble with the sourdough rising since the temperature cooled off (my sauerkraut is having a hard time fermenting as well). The sourdough has been a little too dense lately for my personal preference. On the other hand, the sourdough is easier to cut in thin sandwich slices. Middle dd emphatically prefers the sourdough and the other 2 could care less :). The yeast-free bread tasted/cooked exactly the same with soaking as it did without so it's a definite keeper recipe for soaked bread. Both loaves are 2 cups wheat and 1 cup white. We're not at the point of all wheat yet.
Peanuts (that have been soaked to remove the phytates) ready for the dehydrator: 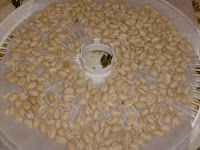 Almonds (also soaked in water with salt to remove the phytates) on another tray ready for the dehydrator: 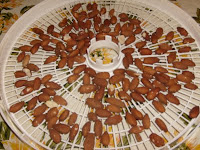 I just came across this article regarding soaking nuts, grains, seeds, and legumes:
http://wss.nourishingconnections.org/Education/Purpose%20of%20Soaking.pdf
This is the breakfast cereal recipe using oats instead of flour (before I poured milk in the bowl!). I had some dried cherries so I cut them up and included them. After baking and crumbling I put it on another tray on the dehydrator (it took 2 trays). Once dry I keep it in the cupboard in a container. It's so filling that the dc only eat 2 small scoops with milk for breakfast. They all liked the cherry in it. 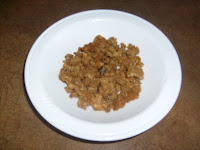 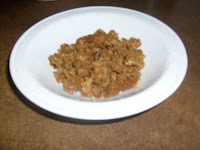 You may be wondering why in the world I would bother making homemade cereal when I can buy it off the shelf. For 3 reasons: the cost, the fact that most cereals are made by a process called extrusion (regardless of whether it's organic or not), and that soaking neutralizes the enzyme inhibitors and phytates. Also, remember that I'm on a food journey to eat closer to how our grandparents and great-grandparents ate (before high incidence of degenerative diseases) for health reasons.
Here is the other 1/2 batch that I mentioned in an earlier post. After the first baking we cut it up into 'cereal bars' instead of crumbling/dehydrating. Since they're moist I keep them in the refrigerator. 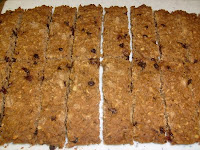