I *finally* got this done!  I ended up making 2 because I couldn't decide on the material.  Since all 3 dc will be using it at the beginning I also made 2 sets of beads/marbles for them to use.  I made 42 cards and divided them into 2 sets (1-21; 22-42) so one set of cards is easier and the other harder.  In other words, on the Periodic Table of Elements, they have a card for Hydrogen (Atomic Number 1) through... whatever Atomic Number 42 is.  The cards have a diagram of the atomic makeup and the name.  They use these to create the atoms on the Bohr model boards.  It'll make more sense when you look at the picture! 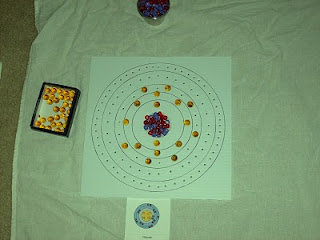 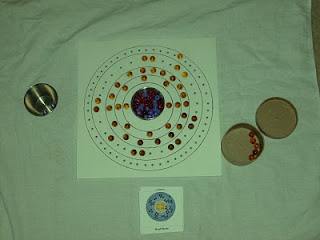 I took those pictures when oldest and youngest dds were working on them at the same time.  Yes, a ninth and a third grader; don't ya' just love Montessori??  One dd put the protons/neutrons straight inside the hole I cut in the center.  The other dd used a little metal cup in that hole to put them.  I chose the pony bead colors to match the color of the numbers for each on the cards (red for protons, purple for neutrons).

Materials:
- Little glass brown 'marbles' (a bag of about 100 from the dollar store is waaay more than I needed)
- Red pony beads (already had some)
- Purple pony beads (already had some)
- Foam board (from the dollar store)
- Coroplast (scraps from when we made a guinea pig cage bottom out of it)
- Cards (made from this link... http://www.chemicalelements.com/index.html  )(click on an element for the diagram/info)

Cost:  $2 plus 7 pages of cardstock and the printer ink

A note about the cards:  I actually copied/pasted each diagram into my 3-part card template and typed the name in the bottom part of the card.  I printed several sets of this file:  one set for this material; another set to cut apart for 3-part card matching; and one last set for control that I have with the cut up cards.  PLUS I also made a set of cards with just the info [Number of Energy Levels, First Energy Level etc that you see by the diagrams at that link] as 3-part cards.  The control set of cards for the diagrams has the plain info on the back so they can be used for controls for either set of 3-part cards.  I tried contacting the person from that site to get permission to share this but never heard back.  If anyone finds info at that site that the diagrams are public domain or free for personal use please let me know and I'll upload the files for you.  I took pictures of the other sets but that was after I had uploaded these - I will have to post those later.

Another note:  I actually just used  a very sharp pencil to poke the holes.  It worked fine on both materials.  For the rings, I measured them out and then found things around the house that were approximate.  I traced around them with a fine sharpie (permanent marker).  The holes are in the space, NOT on the black lines.

Our chemistry spine gets into orbitals this week.  We were able to finish this and have some time to use it before we get into a different atom model.  I really wanted them to have casual use of it all summer before we started chemistry but that's just not how life flowed this summer.

Nothing much... I had a great Saturday cutting up a backload of chemistry cards.  Aside from feeding the family I pushed out all other thoughts so I could actually get it done.  That said, I've mainly been making as many loaves of bread as possible (1-2 a day) so I can have a few in the freezer for this week.  Other than that I have some Great Northern Beans that I soaked in lemon juice (per NT instructions) and cooked in the crockpot with a bit of uncured bacon and salt.

Now that school is in full swing (and I'm working part-time) food has taken a back seat.  We are coasting for a bit until things settle (do they ever?).  My main goals continue to be: avoid high fructose corn syrup, msg, trans fats, food dyes, etc.; make meals at home; avoid too much sugar for the dc; and something else really important that I can't remember right now :).

I got a cabbage that was on sale and had planned to make kraut this weekend.  Well, there are still a few more hours left...
Posted by Bamboo at 6:02 PM