Youngest dd and I were reading bedtime story together last night:

"For days Mother and the girls made jellies and jams and preserves, and for every meal there was huckleberry pie or blueberry pudding." [Farmer Boy by Laura Ingalls Wilder]

"Blueberry Pudding?" I said.
"We have to make some!" she said.

And so began my quest last night to find a recipe for blueberry pudding.  All of the recipes I found were actually blueberry *bread* pudding.  I finally found one that didn't require baking (if I can barely cook biscuits in the toaster oven, I don't dare try anything fancy).  I also found a recipe for Blueberry Almond Breakfast Pudding.

I made the Blueberry Almond Breakfast Pudding that I found at this link with the following changes... I don't know why I can't just leave a recipe alone!  I quadrupled the recipe for the almond meal and eggs (so: 1-1/3 Cup almond meal; 4 eggs).  I used 1/2 water and 1/2 milk (so: 4 tablespoons water and 4 tablespoon milk).  That's it for part 1.  Just cook in a small pot until done.  When is it done?  I wasn't really sure since the original recipe used a microwave; so, I cooked until it sort of bubbled once, stirring constantly.  It stuck to the bottom of the pan a bit but washed off easily.  Then I added in frozen blueberries and reheated it just enough so that it wouldn't have cold spots.  When it was done I scooped a little out for me and then added about a teaspoon of rapadura in the rest of it for the dc.

This is how I will do it differently next time:  Heat the blueberries separately in my tiny pan so I don't have to reheat it all; Try 1/2 almond meal and 1/2 oats so it's not quite so grainy in texture (I'll soak the oats with all of the liquid the night before - with 2 tablespoons kefir for part of the milk - and add the rest of the ingredients in the morning).

The above recipe was made more NT by using almond meal made from soaked almonds (used to make dd's almond milk); pastured eggs from a friend; real milk; clean blueberries we picked from a local farm; and using the stove instead of the microwave.  Wow, I feel so blessed to have these available.

FYI:  I found this nice explanation of the difference between almond paste and almond meal.
http://bakingbites.com/2008/03/difference-between-almond-meal-and-almond-paste/

This is the blueberry bread pudding I'll be making that does not require baking.  We'll use soaked homemade bread.  I will probably cut the sugar in half and use rapadura.  I may stir some coconut oil into the butter as well.  This will make a good afternoon snack for the dc.
http://www.foodnetwork.com/recipes/sara-moulton/summer-blueberry-pudding-recipe/index.html

By the way, yesterday I learned something while making Kelly's broccoli cheese soup... Yes, you CAN throw in a frozen block of cheese while the soup is cooking and have it melt and mix into the soup :).  Oldest dd served herself 4 times!

This is linked to Kelly's Real Food Wednesday

This website came through clickschooling today.  I haven't looked through it all yet but it is now on my favorites list...
http://www.youngzine.com/
It is a current events website for children ages 8-15.  As always, I would recommend previewing before letting your dc on it unattended.

I have been getting empty frosting buckets from the local grocery store's bakery since last week.  It's a symbiotic relationship:  they are throwing them out and I need them.  We save the environment and money at the same time :).  [Side note:  everyone I've talked to from 2 different stores have been so incredibly nice and helpful.  You should have seen one lady talk to me and make roses at the same time.  Wow, she should be on youtube!]  These are food grade plastic buckets.

Anyway... I had to wash some out late last week because they had some frosting stuck to the inside sides.  When I first set them outside the dc told me that there were ants in one of the buckets.  I said not to worry, that it might even get rid of the ants (joking tongue in cheek).  First I tried to just dry them out thinking it would be less of a mess to just wipe them out.  The frosting didn't dry out or change texture in over 2 days sitting in the hot sun.  After I rinsed them out and sprayed down the area of the yard where I had worked I joked again (tongue in cheek), "Watch it kill the grass - wouldn't that be weird?"

Well, the frosting that we feed our sweet little children on their birthday cakes killed not only the ants but our grass as well.  I just couldn't believe it.  I had to take some pictures.  Remember, I hosed off the area where I had sprayed the buckets so it wasn't just left on there smothering the grass.  Unbelievable. 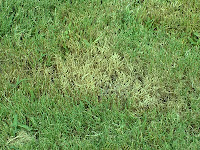 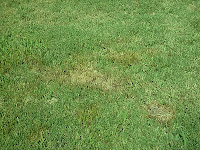 For the past year (or so?) I've been using a butter frosting recipe that I tweaked from a friend's recipe.  It's basically room-softened butter, vanilla, and confectioner's sugar (powdered sugar) until it's the right taste/consistency.  Sure, not a health food but...  The dc love this frosting.  At some point I'll splurge and get natural coloring (it's so expensive) but for now they have white icing and decorate their birthday cakes in inventive ways.
Posted by Bamboo at 1:57 PM