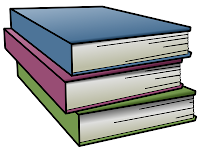 Well, I knew the day would come some day. This week, while cleaning up her room (basically she does a "ten minute tidy" to make sure the floor is picked up and then she moves to her cubbies to organize/clean if there's more time left) youngest dd brought me the cloth drawer full of board books that she hadn't wanted to get rid of before. She would use a few for her dolls but really she didn't even do that.

I went through them after she went to bed thinking it would be traumatic but then realized that it was only traumatic for ME :). As I looked through titles seeing which I wanted to keep for any possible future grandkids I realized that I really didn't need to keep a single one. Wow, what a release! I bagged them up and took them to the used book store. They didn't take many (just enough to get a few new books), but now dd has a Larry Boy chapter book that had her giggling during rest time AND more space in her cubbies - for which she already has plans.

- Chicken broth is in the crockpot.

- Last night we ate leftover baked potatoes and homemade chicken soup with elbow macaroni and corn in it. I love having bone broth going in the crockpot because I can just scoop some out and make a quick meal/snack, add water, and keep it going. BTW, Dh's soup was a can of Campbells (his choice)! Not a gourmet meal but nourishing and dc said it was delicious. They're so encouraging! I knew they were going to have treats out later that evening so I just wanted simple and healthy.

- Today I'm going to slice up and dehydrate some mangoes if they can last long enough to make it in the dehydrator. That way they'll have some for lunch boxes without having such messy hands.

- Nothing else really exciting. I'm going to defrost a flank steak that was gifted to us but I'm not really sure what to do with it...

~Well, it's getting to be that time again. Last year was a real experiment for me. I learned a few things that hopefully I'll remember this time around. I had to undo my little garden patch and am in the process of building raised beds. I only finished 2 small ones (previous post has pics) but hopefully after tax time I can get the other 2 done. Unfortunately by then it may be too late to plant what I want in them. One has the walking onion; the other has the strawberries. We'll add to those beds.

~This week I got a variety of seeds and some seed potatoes. I want to get my potatoes in my container today. I cut 2 up last night to plant today but the other ones I'll leave whole and see which do better. This morning I'm researching potato planting (again).

~This weekend I want to go ahead and spread some molasses and corn gluten meal on *my* side of the front yard... Yes, once again the competition is on as to which of us can keep a better yard in the front. My area is beside the driveway and his is the rest of the yard. My side is organic; his side is... not.

~Last night I started going through my gardening notebook where I keep notes from different gardening books. I have notes about companion gardening in there. Last spring I made a bunch of little cards with the plant names on them and the dc arranged the plant placement on paper as we read through which go together and which don't. We did that today for this year and it REALLY helped to make things a bit clearer for me. When we were done I glued the papers on. That will be my blueprint for this year's gardens. I'm posting a picture below. On one page are the raised beds. On the other are flower beds that run behind the house in which I plant edibles interspersed with the ornamentals (Dh puts up with it - he's such a good sport!!) as well as containers that I'm using around the small back patio. 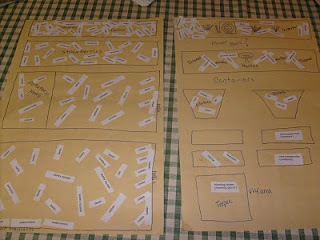