One of dh's favorite turkey-leftovers meal is a simple turkey sandwich with mayo, salt, and pepper. Our first dinner back home mainly consisted of heated leftovers brought back from my mom's, and

a turkey sandwich for him. I had forgotten about the leftover stuffing and made brown rice (with turkey broth - thanks, T., for sharing your broth!). That turned out to be a good thing because I used the rice for the next day's dinner.

For the next day's dinner (yesterday) I cooked onion, broccoli pieces, and cauliflower in 1/2 palm oil, 1/2 butter and put in some seasonings (don't ask me what they were though because I can't remember!). After they were heated through I cut up some leftover turkey meat. The scissors made it so easy - I always forget to use them. When that was also heated through I put in the cooked rice. When that was hot I added enough milk to make a nice sauce. The butter and spices were already in there so it basically makes a white gravy without actually making it first and then adding (I'm a lazy cook). Oh, and a turkey sandwich for dh :). I love these one-skillet meals with the meat, veggies, and rice or noodles all together. We had the last bit of pumpkin pie with my most recent discovery: frozen homemade whipped cream. Better than ice cream!
I'm on my second batch of turkey broth using the same bones. I think I can get a third batch from them, we'll see. The rest of the bones are in the freezer for later because I don't have any more room to store broth. I plan on getting back on my cup-of-broth-a-day habit. I did that for about 8 months with just a few pauses. I could literally feel my knees and elbows burn and itch inside for a few days each time I would start back on it if I missed more than a day or two. My theory is that some of the lyme damage was healing. The kitchen smells so good with that broth cooking in the crockpot - and the foil lid is so attractive! I may steal some out of it to make soup for lunch since it's already hot and pour in some extra water to make up for it.
What else is cookin'?
- I made pumpkin bread yesterday in case my in-laws came by. Good thing, too, becuase they did come by with only an hour notice. It wasn't the best bread I've ever made so I won't post the recipe. Later I found the recipe we have been using so I think I'll make some again.
- I have an eggplant that needs to be cooked today. The dc want breaded/fried eggplant.
- I started purging a recipe binder I have yesterday. I ran across a recipe that uses couscous with broth, dried cranberries, chopped nuts, and powdered ginger. I used cracked 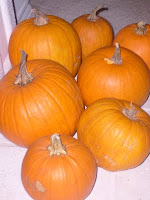 bulgar wheat instead and used hot broth to soak it. I haven't tried it yet but it should be soft and ready to eat now. I'll give it a little taste. Hmmm.... interesting.
- This morning we had Kelly's breakfast oatmeal but I only used 1/2 the maply syrup. I heat water in the tea kettle, warm the bowls with hot water first, dump it, serve the oatmeal and pour in hot water to their desired thickness.
http://kellythekitchenkop.com/2008/02/organic-oatmeal-recipe.html
- Now that Thanksgiving is over and their decorative appeal is also over, these pretty little pumpkins will be cooked and pureed this week - hopefully today.

What's Schoolin'?
- Youngest LOVES the cuisenaire rods. She doesn't quite use them the way they're meant to be used though :). She is enjoying the parts of a horse using the velcro labels on the plastic horse.
- Middle dd is studying the presidents. She is memorizing them by choice.
- Oldest dd is working with maps.
- All three have to write animal reports for their enrichment classes. Since I'm carless we'll have to use online sources only.
Posted by Bamboo at 4:17 AM