We were blessed last week with the opportunity to pick peaches at a friend's house (thanks, T!).  I'm so excited.  Unfortunately I didn't have time right away to deal with them all the way through at one time.  We peeled a whole bunch that night but it wasn't until later that I read to put lemon juice on them so they don't brown.  The next go-round I dipped them in a lemon juice/water mixture as I peeled them.  They still browned again (but much, much less) before I actually canned/froze them.  Mainly I plan on canning them but I may also freeze some and make some preserves. [Update:  I'm freezing more than canning because I can't get it done fast enough.  Plus, I can use frozen to make preserves or cobbler later if we want] 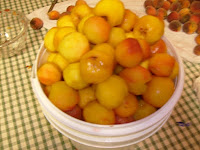 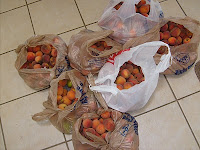 I can't tell you how many times throughout the peaches I've thought, "How would Ma Ingalls do it?"  "Oh yeah, she would have actually set aside a whole day for this and not try to cram it in while driving back and forth to commitments and a whole slew of other things.  Cut yourself some slack and just do your best!"
[Another update:  We opened a can of the peaches last night at dinner and they tasted like...canned peaches :).  I was so relieved, lol] 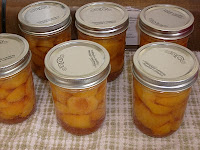 Algebra Schedules:
As part of our eclectic homeschooling we use Montessori presentations and materials; but we also use Math curricula.  In the younger grades (K-6) we use Excel Math and then switch to Teaching Textbooks for Pre-Algebra on up through.... (we'll see how it goes!).  Next school year will be our 3rd year with TT.  I asked oldest dd if she wanted to take a break from Algebra and do a semester of Geometry, then Algebra, and go back and forth.  She said she would rather just go straight through the Algebra [See? Montessori philosophy at work with olders even though following a math curr - get the child's input within parameters].  That should work since we're s-l-o-w-l-y going through R&D's Geometry manual so they are not *just* getting Algebra.  She also (wisely) pointed out that once she's done with Algebra and moves into Geometry she'll still need to be doing some Algebra so she doesn't forget.  I'm so glad I talk to my dc about plans because they usually have insight that I need to hear.  Throughout next year I can be thinking about how to approach Algebra practice during her Geometry year.
Yesterday I was working on my Chemistry plans and going through previously tagged Chemistry links.  This wonderful site has schedules already made for several popular curricula.  I couldn't use those for this year but I was thrilled to use her blank schedule template to put in their Math lessons.  If they do 4 lessons a week they'll have just enough time to finish by the end of the year.  4/week lets them have a bit of slack for those more difficult lessons that may take longer plus the tests (which I forgot to include in the schedule but it worked out anyway, lol).  I have it put in our online planner but since that can change I also wanted a 'fixed' schedule to refer back to throughout the year to make sure we're on track.  That's where her template helps.  Since we're STILL trying to finish up Math from last school year this appeals to all of us!
Here is our Teaching Textbook schedule for next year.  If you happen to start on Labor Day like we do it's all set for you :).  Otherwise, you can just scratch out and change the dates (I only put Monday dates for the week).  Algebra 1 only has 129 lessons but I left 130 so I could use the same form for both olders.  Below that is the link for her blank template (scroll down just a bit).  If you click on her math tab at the top you will find a wonderful schedule already done for TT as well.  I just wanted it 4x/week instead.
http://tinyurl.com/2d4pg9t
http://corefoundations.wordpress.com/schedules/
What's Cookin'?
Aside from the peaches, I am canning/freezing/dehydrating like crazy every second I can.  If you see someone wandering around mumbling "Mangoes, must peel more mangoes; how many cantaloupe can I fit in the freezer?  Must cut up more..." it's probably me (especially if she's having a bad hair day).
I got 6 cantaloupes that were on sale for $1.00 this week.  Those freeze really well.  Last year I thought, "Hmm.... They sell frozen melon balls - Let's give it a shot."  We just finished the last of the frozen melon from last season and it was still good (unless there is a bag somewhere hidden in the freezer that I missed).
The same store (in a  small town) had mangoes on sale  3 for $1.  I got 30!!  That'll be another post :).
Posted by Bamboo at 10:41 AM