Juicing without a Juicer!

Wow, I can't believe it's already been over 2 weeks since I've posted!  Much has happened... [sparing you the details!]  Here are some finds:

Batik-effect easy T-shirt.  This looks like a great project; and so easy with glue and acrylics!
http://kidworldcitizen.org/2012/09/11/diy-glue-batik-t-shirts/

I've had a nagging urge to juice for my liver for several months (long story but I don't have a happy liver).  I couldn't afford a strong juicer and had settled on the $30 one at Wal-Mart; but it may be months before I can even get that one.  Well... I remembered Paquita making me a carrot/orange juice as a teenager when I had food-borne hepatitis (common where I was living).  She had to make me drink it at first, but wouldn't you know it - after I was well I would beg her to make me some because I liked it so much by then. I know we only had a blender and I recently asked my mom about making it.  Unfortunately, she had no idea and couldn't help me.  So...

I got some beets, celery, carrots (which we usually have, anyway), and fennel.  I was able to find these organic at very reasonable prices - in fact the organic beets happened to be less than the non-organic (although the fennel was high to me).  Then they sat in the fridge, and sat, and sat for over 2 weeks!

Yesterday I put the following in the blender along with about 1/2 C water (I added another 1/2 later) and pulsed it until it was well blended:

1 peeled and chopped beet
1 peeled and chopped carrot (It was the last one in the bag and getting a bit "unfresh" so I chose to peel it)
Small piece of fennel, chopped
1 celery rib; chopped
2 small unsprayed pears from the farmers market (cored and thickly sliced)(this was just for flavor)

I strained some in a glass to have some right away.  Mmmmm.  I made myself stop at 2 ounces (more on that later).

I strained the rest of the "juiced" concoction in a quart mason jar and put that in the refrigerator to sip on over several days.  I'll only have 2-4 ounces daily and work up to 4 ounces 2x daily depending on detox symptoms and schedules.

Now, I know this isn't as great as juicing but I'm super excited to be able to do this with what I have.  I also realize that it's best fresh, but I don't want to waste this precious purple liquid gold so I'm refrigerating it.  I may also go ahead and freeze some in 4 ounce portions.  Again, not ideal, but ANYTHING I can do for my liver is better than nothing (I'm fighting my 'latent perfectionism' here!).

After just 2 ounces hours later my mouth still felt... different.  I'm very toxic which is why I have to go slowly.  Just those 2 ounces really hit me this morning and I had to go back to bed for about 30 minutes due to extreme pain and fatigue [breakfast in bed is only a luxury when you want breakfast in bed!].  Even with increased water and oil pulling.  I'm going to salt load as soon as I get back from taking one dd to class (part of the iodine protocol).

Here are some photos I took of this juicing adventure.  You know how hard it is to keep things in focus while trying to keep out the chaos right next to and behind the photo subject??


Here is everything in the blender with the Beet Kvass next to it that I was making at the same time: 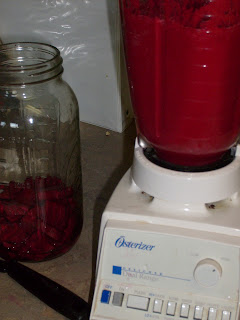 I strained a little to drink right away (2 oz): 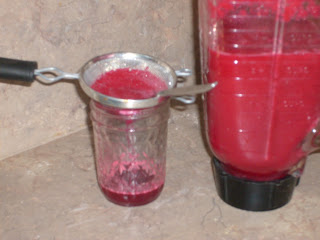 I strained the rest into a quart mason jar and refrigerated it for later: 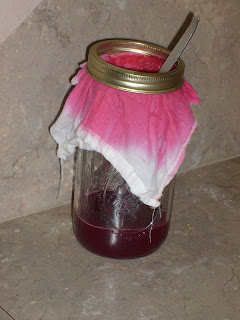 It made more juice than I expected - yeah! 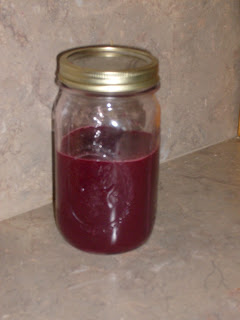 There you have it!  Two GREAT beet drinks ~ Beet Kvass and "Juiced" Beet and veggies: 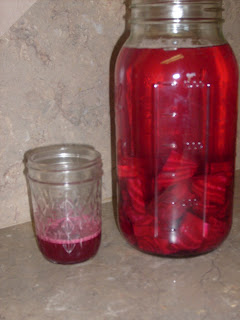