My mom surprised me at Thanksgiving by 1) liking my cherry bread pudding (I didn't know she liked bread pudding!) and 2) asking for that for Christmas.  So, today I'll adjust my blueberry bread pudding recipe to make it cherry - and will probably make an extra for us!  I also plan on making her a pumpkin craisin bread as an extra surprise... and an extra for us if I have enough ingredients!  More on those later.

[Update:  bread pudding was a flop!  I really hate wasting ingredients but I actually had to trash it - ouch!!  We were able to pick some of it out for us and a 1/2 batch was edible but not pretty - sort of eggy in between the bread pieces - so we'll keep that one and I'll just take her the pumpkin craisin bread.  Obviously not the same recipe I used at Thanksgiving.  I'll toss it so I don't use it again and find my other recipe for another time.  Bummer - I spent so much time on it because I had to make some bread first so I could make the bread pudding.  Plus I made 2 batches so I wasted 1 C cherries for one and 1 C blueberries for the other.  So sad!  On the other hand:  the pumpkin craisin loaves look beautiful!  I can't wait to cut one open for a "taster" loaf.]

Here's a quiz photo:  see if you can guess what this is! 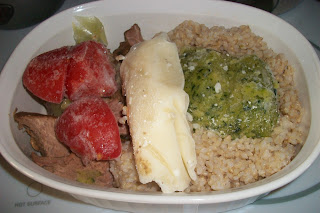 That's the before picture and I didn't get an after picture because we were busy eating it up :).  It was actually quite good, believe it or not from the above photo!  I put leftover roast and rice in the casserole dish and started digging through the freezer.  On top of the leftovers I put a handful of frozen tomatoes (that I flash froze during market season), about 1 cup + of frozen shredded zucchini, and 1 C of frozen white gravy.  After it was thawed in the oven I stirred the zukes into the rice, smooshed the tomatoes and took out the peels, and smeared the gravy over everything.  Then I let it continue in the oven until heated through.  Strange?  Maybe!  However, it was an easy, satisfying meal with whole food ingredients.  What's in your freezer? (said in my best Viking voice)

The thing about homeschooling is that schooling and life are sometimes hard to separate.  Case in point:  Is reading Charles Dickens' A Christmas Carol school or just plain life?  We're counting it as school but want to make it an annual tradition in life - so it's both.  The language is definitely vocabulary building, the details are historical, the story is captivating, and the writing is such a wonderful model of exemplary writing that has withstood time and place.  I was reading from the free kindle download on my laptop but ended up checking out 2 copies from the library so the olders could read it on their own.  One went ahead and read it but the other is really enjoying my reading aloud so she would rather sit in on my read-alouds and then reread it herself.  They will jot down examples of his writing and do a short reflective essay in their literature response logs also.  I like the version we checked out because of the print size and the beautiful illustrations scattered throughout.

This was a surprise:  I saw a nice wooden Shut the Box

game at Big Lots for $10!!  Then I saw another version from the same company at Target for $15.  I guess it's making a comeback because a few years ago when it was mentioned on the Montessori group it was impossible to find.   We ended up playing the game with just index cards with the numbers written on them and flipping them over. I'm posting links below so you can see what I mean.

Another fun surprise at Big Lots was Rumford Baking Powder.  Yes, I'm weird that way - I was very excited that I didn't have to stock up on it anymore from our old town nor order it online.