Cave Mini-Unit Resources:
This has a good demonstration of cave formation using sugar cubes and clay. Go through the links on the right for more mini-lessons. BTW, use modeling clay, NOT air-drying clay or playdough. We experimented with all 3 materials (photos below)
http://teacher.scholastic.com/lessonrepro/lessonplans/theme/caves01.htm 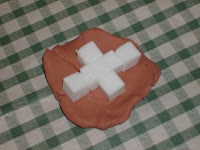 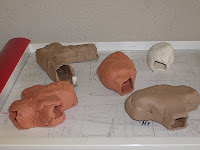 This is an awesome site.

I printed this cave map; used removable tape to block out the words; copied the blocked-out map; made little labels for them to lay on top of the blank boxes; and peeled off the tape for the control (photo below). Even though there aren't very many things to 'label,' they'll be getting a lot of info as they study the map. This could also just be used as a poster or as a page to put in their lapbook. We'll probably glue one in their culture notebooks if we don't lapbook caves. 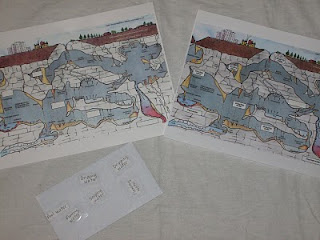 Click on the left tool bar for some neat activities:

Make your own formations:

I haven't looked through this thoroughly yet but I used their study for Texas Missions a few years ago and it was well done:
http://www.nps.gov/history/r/twhp/wwwlps/lessons/35mammoth/35mammoth.htm

This section has some good lessons:
http://www.nps.gov/maca/forteachers/curriculummaterials.htm

Last but not least, one of my all-time favorite resources: homeschool share. They actually have one for the book we read. Gee - I should have checked there first :)

And now I'm making myself stop before I end up writing a thesis for a mini-unit! For sure we'll make the cave using clay and sugar cubes. I've already printed from several of the above resources and have put some notes in a document so I can remember some of these great ideas. We checked some non-fiction cave and rock books out from the library. They will either glue things in their culture notebooks or make lapbooks with things like the cave cut-out with details (like the one I used to make the labeling activity), map of Mammoth Cave, and other printables.

Here is a partial list of books we read:

-Caves: Mysteries Beneath our Feet by D. Harrison (excellent for youngers)

-Texas Caves by B. Pittman

-[I wrote this a long time ago but am keeping it in] Being Sunday my dc wanted to gorge themselves with sweets (sigh) and basically did with the help of my mom, myself, and dh. You would think they've been without sweets for years and it's only been 4 days since Lent started! It's a mental thing, I think. As much for the grownups as for the children because each one of us spoiled them with a 'treat.' Anyway, I thought my 'treat' for Sunday was fairly decent because it's full of milk, egg yolk, and we ate it with bananas. I was at my mom's watching Fast Food My Way with Pepin and he whipped up this pastry cream that was a basic vanilla pudding. I doubled the recipe but the single recipe would have been plenty for our family of 5 because it's very rich. Now I'm not sure how to keep the extra until next Sunday. I'm considering freezing it and eating it like ice cream. Any ideas? I used fresh milk instead of half and half, turbinado instead of refined sugar, and more vanilla. The recipe is in the sidebar here:

- I asked dh what kind of beans he wanted. I expected pinto, kidney, black, etc. He said "ranch beans." Hmmm. That stumped me. So, upon googling ranch bean recipes I found tons and tons that use a can of ranch beans in the recipe and found only one before I got dizzy that was actually a recipe to make them (happened to be first on the list, btw). It calls for chili powder. Okay, on to research recipes for chili powder. Several places had the same recipe so I'll just post it instead of a link:
1 tsp paprika; 2 tsp ground cumin; 1 tsp cayenne pepper; 1 tsp oregano; 2 tsp garlic powder.
Regarding the ranch beans, he kindly offered to pick up a can on the way home. I can't eat commercially processed beans but if this recipe doesn't come out he may end up with a can of beans after all, lol. I didn't have any cumin so I made the chili powder without.


I soaked the beans overnight with the juice of 1 lemon (actually a lime) and cooked them all day in the crock pot before continuing with the recipe. I scooped some out for other meals before I got to the ranch beans.

When we were ready for the ranch beans for dinner I heated up the cooked beans in a pot on the stovetop. Before seasoning I scooped some out for youngest dd and myself. Then I sort of used this link as a guideline and basically put in about 1/2 teaspoon of the homemade chili powder and several dashes of Real Salt. That's it. No MSG, no plastic-lined can, and traditionally cooked beans with neutralized toxins that we could all enjoy.

The best part was when dh said that they were good enough to be served in any restaurant or win a contest.
Posted by Bamboo at 6:42 AM