Money: Race for a Quarter

This game is called Race for a Quarter and it's a take-off from Race for a Flat (which I use to introduce place value regrouping).  Each player has a playing mat.

Roll the die, get that amount of pennies from a "kitty" to place in the penny's place (you always get pennies with your roll). When you get 5 you excahnge it for a nickel. 2 nickels get exchanged for a dime and so on. Whoever gets a quarter first is the winner.  You could extend it to "Race for a Dollar" and have the players get 4 quarters.

How to make the mat:  Section off the top row and each column making sure that the coins will fit in each as shown.  I used stamps to put the pictures of the coins but you could also print/cut/paste from online.  I made mine way before the internet (yes, I'm THAT old!). 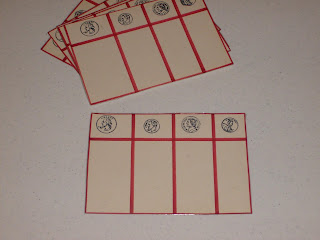 Soaked Buttermilk Biscuits:  I'm trying Katie's recipe from her FREE e-book called Is Your Flour Wet? (p. 22).  Sign up for her new e-newsletter and get this 84 page e-book for free.  The informational section in the front is fantastic and succinct (unlike my own rambling which is why I don't ever even try to explain why you should soak, sprout, or use sourdough).  There are many recipes as well in this wonderful free e-book. :)
http://www.kitchenstewardship.com/2011/05/09/download-is-your-flour-wet-a-soaked-grains-ebook-for-free/

Cinnamon (Raisin) Biscuits:  Usually when I make cinnamon raisin biscuits I just add a handful of raisins, several big dashes of cinnamon, and a few teaspoons of rapadura to my soaked biscuit recipe.

This time I tried the following recipe and adjusted it to a white whole wheat soaked recipe.  I mixed everything EXCEPT the baking powder and baking soda the night before.  I used kefir instead of the buttermilk.  [I actually got some buttermilk at the store to try to culture my own but I don't know how to do it yet :).  I need to find out ratios or if that's even a good way to do it.  So, all that to say I just used kefir.]  I used 1/2 the rapadura for the sugar - just enough to make it palatable - and skipped the topping.  This makes it more of a snack than a treat.

I'm finding that it's easier the next morning to spread out the dough and sprinkle the leavening over it when making soaked muffin/cookie recipes.  Then knead and knead it in.

Here is the original recipe:
http://countrygirl-hollie.blogspot.com/2011/04/cinnamon-biscuits.html
Posted by Bamboo at 7:36 PM