Today I'm freezing eggs.  Really!  I can barely curb my enthusiasm, lol.  I am so thrilled to be able to buy wonderful eggs from a dear friend right now and to get occasional eggs from another dear friend.  To make them go further at mealtime I usually throw in a few inexpensive local conventional eggs from the store (not great, but food, KWIM?).

Why bother freezing eggs?  Because chickens don't naturally lay eggs year-round here and I'd like to have some nutrient dense eggs for us during the lean months.

This is the recipe/directions to freeze eggs from a food forum (thanks, L!):

Beat 6 eggs with 1/4 teaspoon salt.  This is suppose to almost fill a pint mason jar.  Freeze.  That simple?  Wow.  I put 8 eggs with 1/4 teaspoon because that's what I usually cook at a time.  I tried 2 different containers and really like the mason jar better.  The big test will be defrosting and cooking them.  [Update:  Right now the pyrex bowl is sitting in the refrigerator defrosting for tomorrow's breakfast.][Another Update:  They were just fine!  They defrost a little thick but I usually put yogurt, kefir, or milk into our scrambled eggs anyway so that was no problem.  The only problem was that I stepped away to pull out my to-do list and they got a little brown on the bottom.][This is part of Kelly's Real Food Wednesday:
http://kellythekitchenkop.com/2010/10/real-food-wednesday-102010.html#comment-75902 ] 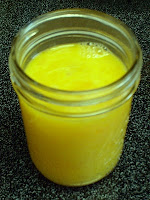 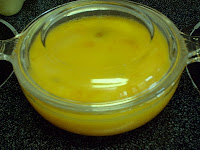 We made these Pecan Slices this evening (oldest dd made them).  Changes:  We did 1/4 cup coconut oil and 1/4 cup butter (I'm stingy on the CO when it's getting low).  We did almond meal instead of pecan meal.  Our almond meal was actually still wet because I had just finished making dd's almond milk (from soaked nuts).  We used honey instead of maple syrup because I suspect that I'm allergic to maple syrup.  We used unbleached all purpose white flour because it was a spur of the moment recipe and I don't have coconut flour.  Dd had to add more flour because it was too soppy to handle.  She added flour just until the dough was manageable.  That was probably because of the wet almond meal.  Since I had to use the toaster oven and things burn if you don't flip them half-way through, I set a timer for 10 minutes, flipped them, then set the timer for 5 more minutes.  I'm considering this a health food since I ate my *third* one with a glass of milk :).  They are not very sweet, which I love.
http://themommybowl.com/2010/09/21/pecan-slices-grain-free-vegan/
One more thing... Since I was using the toaster oven I could only bake 1/2 batch at a time.  I put the dough in the refrigerator while the other cooked and it was much easier to handle.  I could even slice a few of them.  I think this dough would probably freeze okay, but I'm just guessing.  I will probably freeze some of the cookies. 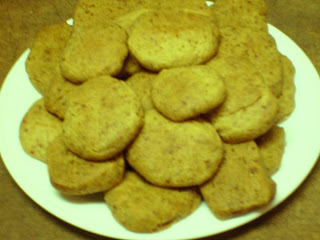 The mudballs that were posted on Heavenly Homemakers were a big success today and very easy to throw together while reading history aloud and lapbooking and doing Little House on the Prairie book club homework and making yogurt dough, and kefir smoothies for snack, and...  I may try them again with 1/2 coconut oil and 1/2 peanut butter.  I did not have sesame seeds so let's call that optional.﻿  I used dry almond meal instead of wheat germ.  For the oats I used some oatmeal that I had soaked, cooked, dehydrated, and ground (phew!).  I'm thinking of making a batch with just coconut oil instead of any peanut butter at all in lieu of coconut bark for my preferred taste.
What's Gardenin'?
I planted basil, parsley, sugar snap peas, oregano, and several types of peppers last weekend.  I also mixed in some expanded shale into the soil of that bed before I transplanted.  I have some seeds that, per my modus operandi, I will toss around and see what happens.  They are:  lettuce (3 kinds), beets, radish, turnips, kale, kohlrabi, cucumber, and beans. The feed store had 10 packs for $1 and I simply couldn't pass it up.
I also have some onion to plant and need to get some organic garlic asap to plant.  I can actually grow garlic successfully!  This will be my 3rd season.  I like the elephant garlic from the health food store for now.

I got dh 2 crepe myrtles for our anniversary (aren't we romantic?).  As I closed the van trunk and hopped in dd said, "There are a million gnats on these leaves.  Can I sit somewhere else?"  I opened the trunk back up and a zillion gnats (she had miscounted) flew out and swirled about my head.  I shook the bushes and got as many out as I could.  Back in van.  Everything itched and tickled because I imagined gnats swarming me.  That was actually partially true because I felt a tickle on my wrist, looked down, and saw an aphid.  Oh great.  "An aphid!" I said, a bit disgruntled by then.  I then heard a voice from the back seat, "There are a million aphids on the plants!"  Oh dear.  Back out of the van (and let child move up front).  Yep, aphids. She had miscounted again because I know I counted at least a gazillion aphids after we got home.  I left them in the van until I could figure out what to do.  Now they're in the side yard until I can deal with them tomorrow.  I doubt they'll go anywhere tonight since they are very happy where they are.
What's Schoolin'?


Elaine asked a question about what is on the shelves for the olders (younger uses a lot of these materials also).  This is a run-down of one of the tall shelves - the one on the right in this picture.  Things have been rearranged since this photo but it is the same bookcase.  I combined both skinny shelves with maps and such into one.  I am listing what is on the shelves of the right bookcase right now. 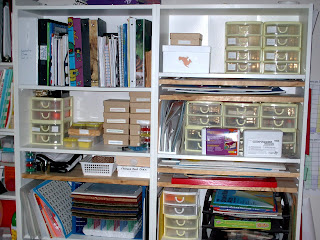 ~Top shelf:  My teacher resources that are 'in use' this year sorted by plans, writing, reading, history, math, science, misc.
~Second shelf:  Zoology Box, Physics Box,  Botany Box, and Chemistry Box.  These are video boxes that I picked up on sale, a few at a time, at the hobby stores.  Also: a physics kit that didn't fit in the box; 2 little drawers with biome and habitat cards; an Electric Gadget project book

; a Trail Guide to World Geography

book (not sure why that's on the science shelf!); a Rocket Minds World game by Crayola, a cork whistle (why??); 2 unfinished lapbook unit studies (squirrels and monkeys) from a year ago that youngest will never finish, and a size D battery.  Okay, so not all of that makes sense, lol, but I'm sure it will only get more humbling - depending on how honest I am :).
~Third shelf:  This has the flat things like pin maps, place mats that we have from Wal-Mart with things like the Presidents on them, etc.  Youngest dd has been focusing on the US pin maps lately and learning the state and cap placements.
~Fourth shelf:  Sets of little drawers (the yellow ones in the picture) with the pins for the pin maps, geography cards, magnetic puzzle pieces; VanCleave's Geography for Every Kid

; huge push pins for punching; imaginary island cards; geography card set; a coin purse with coins from El Salvador (wrong place!), and a tiny basket with some sand dollars (again - wrong place!).... Maybe I should rearrange and then get back with you on this topic, lol.
~Fifth shelf:  Globe ball

, world felt map, little wooden children from around the world, boxes that go with the world felt map, Atlas-in-a-Box card game (they use this a lot).
~Sixth shelf (bottom):  Continent boxes, atlases, controls for maps, anything of interest geography-wise like charts or maps that need to go upright like an atlas.
~Underneath the shelves:  A US foam map that is awesome

.  Each puzzle piece is a separate state.  It's by Lauri.  Youngest dd uses this a lot and has traced each state on a large manila paper to make a US map twice already.  She isn't punching them but just traces and labels.

Hope that helps and I'll do another shelf in another post...