Multiplication Bead Board:
I redid my Mult Bead Board. Here is a picture of my old bead board. It's been a few years so I don't remember exactly, but I *think* the printout and directions were from jmjpublishing.
http://family.webshots.com/photo/2654706870100452258VOOFML
Below I'll paste a photo of my new one. I cheated and used the blank side of a $0.99 hundred board (available at any teacher store but I got mine at Mardel). I trimmed off the border; rubber cemented it to white foam board; used a highlighter to make a yellow border at the top and left (because I didn't have yellow foam board) to match the yellow for the multiplication works; trimmed using a metal ruler and exacto blade; wrote the numbers on top with a sharpie; and finished the edges with clear strapping tape to hold down the edge of the chart and wrap around the edge of the foam board. This is smaller than the older board so it fits straight up in the cubby with about 1cm to spare.
There are 2 sets of materials to use with the board. Set one has the little flat beads I used with the olders (in the old picture above). I switched out the little green wooden milk jugs with velcro and the little chips with velcro that the olders used for little yellow fun foam tiles I cut up and wrote the numbers on with sharpie and just 1 red translucent chip to move across the top.
The other set has 100 units from the Base Ten Blocks, poker chips with the numbers on them, and 1 red translucent chip to move across the top numbers (my personal favorite because I can handle the little cubes easier; youngest dd likes the pretty flat beads best). The child can choose from either of these sets. 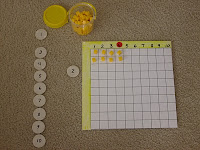 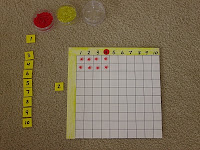 What's Cookin'?
[disclaimer: I started this post weeks ago so "tonight" doesn't necessarily mean "tonight"! So much has happened since starting this post - like blowing out my oven and attempting to make tomato sauce so I could can it.]
I made some macaroni and cheese using this recipe. I added a VERY non-NT ingredient: cut up Little Smokies that dh brought home the other day. It was delicious and I savored every bite :). I served it with a cantaloupe.
http://www.macaronicheeserecipes.com/StoveTop.htm
Tonight we had tacos. Sounds simple. I can make just about anything complicated. I used Kelly's fermented tortilla recipe but since I didn't have milk, I just used water and since I didn't plan ahead I just used white flour instead of wheat. Older dds helped me flip tortillas while I sauteed a mixture of onion, banana pepper, and zucchini slices in butter ("Wow, that's a lot of butter, Mommy!"). Then I reheated some browned ground beef that I miraculously precooked in the early afternoon. Then (I'm using the same pan, BTW, for each of these, lol) I heated up the black beans I had made the day before and left them simmering on the stovetop while I stuck the rest in the warm oven. Then I sat down with a cup of coffee and typed dd's 4-H paper for about 20 minutes because, well, just to help her out a little since she had already written it, and everyone else played outside (bliss!). Between the sweet sauteed mix, a diced tomato from a friend's garden (thanks, K!), and everything else it was a party to the taste buds.
Blueberries are in season! I LOVE blueberries. We picked almost 30 cups of blueberries at a blueberry farm. 15+ cups are in bags in the freezer. 10 Cups are waiting anxiously to see what becomes of them. The fate for some will be in a blueberry cobbler. The fate for others will be to be scarfed down unceremoniously by any and all. Others will be turned into blueberry jam and canned. Some have already mysteriously disappeared. I found this blueberry cobbler that I plan on making:
http://www.cooks.com/rec/view/0,1837,152191-241197,00.html
[Update: the cobbler was delicious - just not quite enough for 2 servings for a family of 5 (over 2 days, not at one sitting!)][After all was said and done I saved at least $45 on blueberries and jam for the year (10 jars of jam) ... Not bad for a fun family outing!]
Onions: I picked a bunch of onions and am cutting up and freezing them. They may last 1/2 year of cooking/seasoning. I'm going to try making onion rings. Here are a few recipes:
http://www.cooks.com/rec/doc/0,1650,147189-248197,00.html
http://www.cooks.com/rec/doc/0,166,147188-248197,00.html
I find myself at cooks.com often. I like their recipes because they're simple :)
[Update: I used the second recipe and they were delicious. Here's a picture] 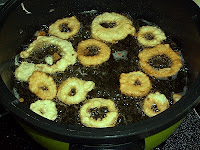 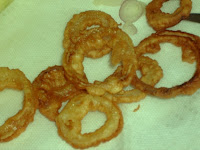 Then I fried some zucchini and some eggplant with the same batter. Not nearly as good as the onion rings but okay. 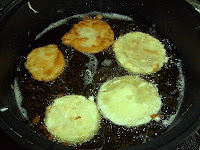 Since I broke my oven (sigh) I tried making yogurt in a water bath in the crockpot. The 3rd try I heated the milk up in an electric skillet, poured it in a quart jar (spilling a bunch on the counter!) and was able to keep the temperature at 110F from the beginning. We won't talk about the first 2 tries... (Ignore the ugly stains in my crockpot from cooking black beans) I put a washcloth under the jar so it wouldn't sit directly on the bottom and I preheated the water to the right temp. I also waited until the milk was the right temp before putting it in the jar. 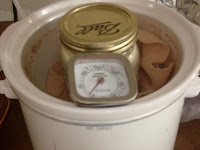 I got a bunch of tomatoes to make some canned tomato sauce. By the time I spent hours washing, parboiling, seeding them (the dc peeled them), and cooking the sauce I only had 5 cups of sauce. I'll try it again with Roma tomatoes but without more yield it's hardly worth it for me. 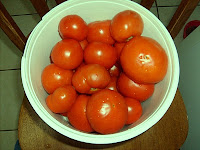 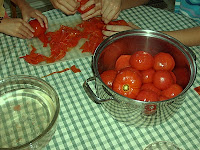