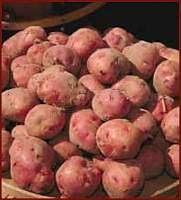 I simply couldn't think of a more creative title other than "potatoes." Sad, huh?
I've read and heard over and over how easy potatoes are to grow. Last year I tried them in a container. Short version of the story: they rotted. This year I tried them (again) in a container taking more care with drainage and layers while also changing containers. Nothing. That was over a month ago. Well, this weekend I tried *again* (and yes, I'm aware of a certain definition of 'crazy' being doing the same thing over and over and expecting different results!). I scraped off the top inch off of the container, put fresh red potatoes (little and not cut this time) and put fresh dressing on top.
We'll see what happens in that container... but this is what I'm REALLY excited about: 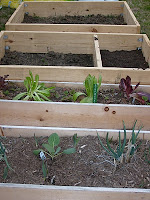 A few weeks ago dh built me the last two raised beds. Saturday I put a divider in one of them creating a little potato bed within the bed. I drilled holes in the divider so, theoretically, the worms can go across (more on my solution to the 'worm tower' later). Now the little red potatoes can get going while I work on building up the one next to it. Plus, when it's harvesting time I won't disturb the other plants. This was actually in my original paper plans and it's so exciting when a plan (no matter how trivial) comes to fruition. Here are some pictures I took right before covering up the last potato. 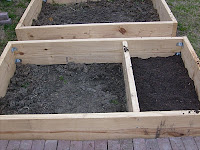 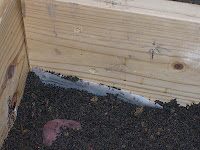 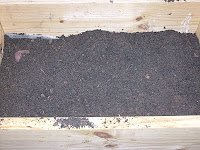 Lyme Disease Awareness:
Here is an opportunity to create more Lyme awareness. There is a contest to see which design will be put on a NASCAR race car. You can vote once a day until it ends. The design is pretty cool and lime green is always eye-catching. Chances are you know someone with Lyme and/or coinfections, even if *they* don't know it! Remember, less than half of 'lymies' had the bulls-eye rash and it is a clinical diagnosis. The CDC requirements are for 'reporting' purposes, not treatment purposes. Click on the 3D button to see all sides and don't forget to vote! Thanks!
http://www.sponsafier.com/#/gallery/view/165020
What's Cookin'?
- Sunday we made banana pancakes for breakfast. We also made maple syrup candy (for our continued Laura Ingalls unit). I didn't want much candy (and I didn't want to use up too much maple syrup) so I only used 1/2 Cup maple syrup (the real stuff) and 1/16 C butter (the real stuff). I stirred over medium heat until grainy (I STILL don't know what that means!). Since I didn't want to put hot liquid in plastic molds I put them in little metal cups. They got quite distorted when I got them out but I tried to remold them for the picture. Dh says they taste like pralines without the pecans. They taste even better to me :). 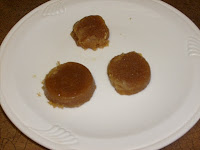 - We made pretzels using the recipe at Holy Heroes Lenten Adventures. It is still rising so we'll see how it goes. We made them last year and the dc still remember that we used too much salt on the outside, lol.
http://www.holyheroes.com/Articles.asp?ID=170&Click=921

What's Schoolin'?
- I thought I would show you our centerpiece from our kitchen table. Youngest dd was doing weight measurement in math today so that's why the labels are gram and kilogram. By the way, did you know that Base Ten Blocks are made to correspond with grams? I never have enough weights so that comes in really handy sometimes with the scale. I thought if I left this front and center, so to speak, for a few days it would help internalize it. 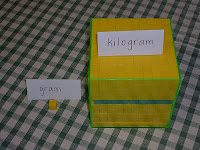