While I have Algebra on my mind from the recent post... The olders use Teaching Textbooks

along with Montessori materials.  However, dd took a break between Pre-Algebra and Algebra to do Hands-On Equations.

It has a video (or DVD) for instruction and short leveled workbooks.  It uses a balance, pawns, and number cubes to do the problems with manipulatives.  This curriculum could be set out as shelf work or done in a structured way.  We did it both ways.  Honestly, she didn't choose it for shelf work ahead of time (she also already knew we'd be tackling it so I guess she didn't feel compelled to start early on it).  Then she did that as her Math time as mentioned above.

Since dd was older and had already done Pre-Algebra she zipped through it pretty quickly.  If we had done it before Pre-Alg she would've gone slower.

They say that it can be used from Grade 3 on up.  Youngest may or may not be ready but we have so much else going on in math right now that I'd rather not put it out at the moment.  She is still using the Dot Game almost every day :).  [I posted a picture of the Dot Game in progress below.]

You may be able to find some used products here:

Here is their site to see it better:
http://www.borenson.com/

Dot Game:  We use a grease pencil to write on the glass.  It's simply a printout in a frame from the dollar store.  For the grid paper I printed some 1/2 in square grid paper (instead of the 4 squares per inch that the quadrille notebooks have) and put it in a portfolio folder for her to use with Math shelf work: 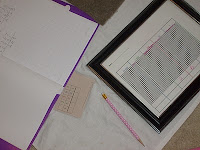 Beef Stew:  I adjusted a recipe with what I had on hand.  I ended up tossing the following in the crockpot:  5 small coarsely chopped (organic) potatoes; 2 coarsely chopped (organic) carrots; 1 fresh garlic clove ("smooshed" on the counter with the side of a knife); 2 small (organic) beets; 1 pound stew meat (grass-fed); 1 bay leaf.  The stew was good but a little dry. I should've added a bit of broth to it. Unfortunately it wasn't enough for my hungry dc who wanted seconds and we had to supplement. Fortunately middle dd had just shot a kitchen video of her making strawberry cream cheese (she made the cream cheese from yogurt in the video) and I had tossed some yogurt dough in the toaster oven for crackers, so we ate that up too!


[The reason I use organic potatoes and carrots is because they are some of the biggies for absorbing pesticides and herbicides.  In fact, carrots are actually used as a throw-away crop to clear fields of (natural) arsenic in the soil.  The carrots are just a few more pennies, literally, than non-organic at the local Kroger.  Potatoes are more but I was finding them for almost the same price as non-organic for a while at Wal-Mart.  At Kroger they are just over $4 for 5 pounds (I think)] [And yet, I buy non-organic potato chips for me 'cuz they don't use corn oil and I can eat them - rolling eyes at my own incongruencies.]


Mini Pesto Pizzas:  I used yogurt dough to make mini individual pesto pizzas.  I rolled out small circles of yogurt dough and baked them first.  I put a dab of pesto, some cooked chicken, and some mozzarella on each.  On dh's and mine I put some tomato also.  Then I broiled them for just a bit until the cheese melted. 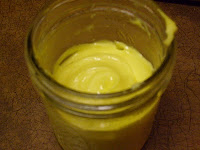 Mayonnaise:  Yeah, it worked this time!  I talked about my flop here but this time I used Katie's technique with the following ingredients:  2 egg yolks (room temperature); 2 tablespoons of lemon juice; salt; pinch of sugar; 1 Cup oil (I think I used sunflower - I still switch these around because I'm never sure which to use).  I would've put mustard but since I had just had a flop I didn't want to add any variables.  It's such a pretty yellow color but I'm not sure if you'll see it well in the picture: 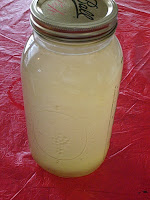 Lemonade:  I made another batch of fermented lemonade.  Here it is ready to sit and do its stuff for 2 days.

Vanilla Beans:  A friend is ordering these vanilla beans

and offered to split the order with several people.  I can't wait.  I completely trust her judgement on this choice.  My batch of homemade vanilla should be ready to use soon.