What Do Lemonade and Beans Have in Common? 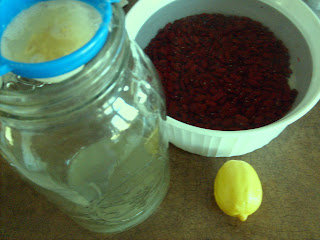 Obviously the lemonade has lemons.

The beans are *soaked* in water with lemon added to it overnight to neutralize the aflatoxin in it.  For 1 pound of beans I use the juice of 1/2 lemon.  When I read that in Nourishing Traditions

I had a major *WOW* moment (as dh and dc say, "Now I'll say it backwards - WOW.  Upside down:  MOM."  He teaches in middle school, what can I say??).  I knew I wasn't allergic to beans and corn; had grown up with both in Central America with no issues; but couldn't even eat one single teaspoon of beans without suffering very, very painful open lesions all over the tops of my hands.  No tortilla chips either, no way...

Well, when I read that I thought I would test it in a big way.  I made the beans according to the directions (basically soaked as I just described, drained, rinsed, drained and cooked in the crockpot with water until tender).  I ate not one, not two, but three hunkin' bean burritos bursting at the seams for dinner that night... Nothing.  No reaction.  No  cuts.  No lesions that take weeks for a single one to heal.  No shudders of pain every time I washed my hands with pulsating pain later.  Nothing.  Wow, wow, mom.  That was a huge breakthrough for me!

No more canned beans for us and much less any beans at a restaurant or anywhere else.  We only eat soaked and homemade now.

I have several thoughts on the issue.

#1:  I grew up eating corn and beans made in TRADITIONAL ways.  When they are manufactured in the modern food industry they don't take time to soak their beans!  Corn was still treated with lime (nixtamalized) and prepared slowly (which also neutralizes the mold/toxins).  As long as I eat traditionally treated beans and corn I'm fine.  The last few weeks I've gotten into some corn somehow and am paying the price (ow!).  BTW, fresh corn on the cob is fine for me because it hasn't been in storage to accumulate the mold/toxins like cornmeal has.  Weird, eh?

#2:  Immune system connection.  I started having this problem at the tale end of my 5 year non-stop Lyme treatment with antibiotics.  My immune system had suffered so, so, so much with the Lyme, co-infections (Babesia, Bartonella, Erlichia), and dormant viruses that had a huge party with numbers out the roof.  My poor immune system had nothing left to fight off whatever damage aflatoxin, etc does.  Plus, I had no more good bacteria left to fight off any candida or anything else entering through the gut (not to mention leaky gut).  I'm only surprised it didn't start sooner.

#3:  I am the canary in the mine.  Apparently there is something to the soaking.  I react in a visible (and painful) way but that doesn't mean that it's not affecting my other family members as well.  I use to get them organic tortilla chips and they love them but in the last several weeks I've been convicted of only getting treated/organic tortilla chips.  Of course, those don't exist so I haven't gotten any.  I'm sure I still will but we were eating 1-2 bags a week (for a family of five) with beans/rice or chili or whatever.

#4:  I am so very grateful to be able to eat beans again!

#5:  I've noticed that (except for the last few weeks) whenever I do get into something by accident and get a lesion there are fewer than I would normally get and they heal overnight (I use PRID salve

, it's the only thing that works), and sometimes they were even healing with no salve.  I took that as a sign that my body was not so overloaded or was (finally) getting stronger and healthier overall.

About the Fermented Lemonade...

I've tried several recipes that are all equally wonderful but I thought I'd post what has been working for us.  Lemons usually go on sale 4 for $1 so I get 4.  I steal 1/2 to soak the beans and only use 3-1/2 lemons to make the fermented lemonade.  Add the following to a 2-quart mason jar.  Leave it on the counter for 2 days.  Put in the refrigerator.  These are vaguely the directions in NT

.
- 3 Tablespoons rapadura (the probiotics will eat up some of that so it doesn't taste sweet at all)
- 1/4 C whey (from drained yogurt or kefir)(This is what makes it a lacto-fermented drink with good probiotics)
- Juice of 3-1/2 or 4 lemons/limes
- Filtered water to the top of the jar

This post is part of Kelly's Real Food Wednesday:
http://kellythekitchenkop.com/2011/01/real-food-wednesday-12611.html
Posted by Bamboo at 8:44 PM