I've been trying to post this all day :).  Here is a picture of the little surprise dc found at the table when they got up.  I found an icon image online, pasted it in a document, used the shapes template to make a pink rectangle around it, and added a text box with the words, "Happy St. Valentine's Day."  I added a note on the back of each card.  They were taped to little individual bags of Sundrops

for them to take in their lunches for enrichment today. 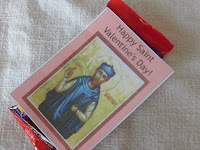 Truffles:  I also indulged the dc by making Laura's truffle recipe today  (I did the simpler recipe at the link).  Youngest dd made them with me.  They were so incredibly easy and way too good!  Let's just say that I had 2 glasses of milk today to help even out the sugar I ate!  I only made 1/2 the recipe and I think there were 30 little balls in my batch.  I ended up freezing about 10 so I wouldn't eat them.  I rolled them in powdered sugar made from rapadura in the coffee grinder.  I just keep some stashed in the cupboard in a little jar for things like this. 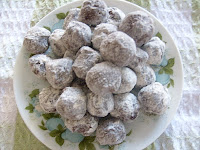 Crepes:  One more indulgence!  These were suppose to be for Our Lady of Lourdes, or for St. Bernadette's feast day.  I was too late for one and too early for the other!  I made extra crepes and froze them so maybe we can have them on an appropriate day.  They sure were good though!  For the filling I just put in some thawed frozen organic berries (semi-thawed since I didn't take them out soon enough) and folded them closed.  Then I put some whipped cream on top that I had left over from yesterday's fruit salad.  I had whipped the cream with some vanilla and rapadura.  The ones in the photo are ready to be packaged for the freezer.  I had 2 recipes printed to choose from but I went with the one that used less milk since I was low:
http://catholiccuisine.blogspot.com/2009/02/candlemas-crepes.html
http://catholiccuisine.blogspot.com/2008/04/crepes-for-feast-of-st-bernadette.html

They were not hard to make, it just took time to stand there and flip them - just like pancakes do.  My biggest accomplishment with these though (aside from only ruining one - the dog was very happy!) was that I attempted them in a 8" stainless steel pan rather than the non-stick.  It worked!!  I just put about 1-2 drops of oil before each one.  I never had to resort to the non-stick.  I am almost ready to completely let go of our teflon back-up pan :).  I just need to get a second pan first, though. 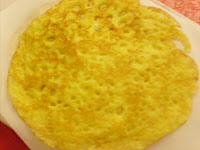