*****OCTOBER IS NON-GMO MONTH*****
Can you go a whole month without eating Genetically Engineered (GE) or Genetically Modified (GMO) foods? It's a harder challenge than you think! Some of the foods most likely to be from a GMO source are: corn, soy, and sugar beets. The "Organic" label is often abused but one thing it guarantees is non-GMO.

My goal this month: Call the local egg farm that supplies the local grocery stores and Wal-Mart and ask if their local farmers use GMO soy or corn for the chicken feed they use. I know, I don't like the soy in it at ALL but at least it will put a bug in their ear to open up discussion with the local farmers regarding GE/GMO crops. Hmm.... maybe I should ask at the feed stores as well because that's where most people are getting their feed for local eggs, even those that are free range.

Please take 1 minute of your time to read this link. It puts several concerns succinctly into one page. Then you can peruse if you want to know more:
http://www.responsibletechnology.org/gmo-basics

Bean soup. But not exactly how I grew up eating bean soup... I'm sort of borrowing some ingredients from a friend's split pea soup recipe but using the beans/liquid that I have from making a pound of beans earlier in the week. I put some oil in the bottom of the pot and sauteed a whole one of each: onion, garlic, a chayote squash (I actually DID grow up eating that!), zucchini, and celery bunch. I put a bunch of Real Salt

, pepper, ginger, basil, and paprika in it when it was almost done.[an aside: when it was all yummy-looking I scooped out a spoonful, put it in a bowl, put a teaspoon of salsa on it, and mixed it. It was the best corn chip dip I have ever tasted!] I then put in 1-1/2 quarts of bone broth and a quart of beans (which was about 1/2 beans and 1/2 liquid). At the very end I put in a splash of cream - but it's really thin so I could have just used milk (or skipped).

Once the soup was in the bowls I offered the following options: a dollop of sour cream in the soup, salsa for a bit of a kick, and organic (non-gmo!) tortilla chips.

*Here is a short article about saturated fats and the USDA dietary guidelines:
http://www.theepochtimes.com/n2/content/view/43738/

Here is a picture of our land and water form trays.  I use to have bigger ones with lacquered sculptey clay that was painted.  Honestly, I like these little ones better.  They fit in our Land and Water Forms basket with multiple works and since youngest is 8 the size is fine.  Plus, if they want to smoosh the clay and redo them they are not too big.  I took this to put in dd's culture notebook after she poured water in them, so I thought I would go ahead and post it.  We use to keep blue water in a bottle for this work but not any more.  She makes colored water whenever she needs/wants it: 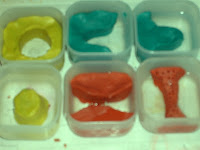 These are pictures of their imaginary islands that they made with the cards this week.  We plan on making some salt dough so each can create an imaginary island that includes the different land/water forms.  We'll make little flags to label them﻿.  This week youngest dd was looking at an old imaginary island atlas that I made with a class while teaching public school eons ago.  That would be a logical extension while they are interested.  The one I did so long ago has the map drawing, a key, etc. and a creative story. 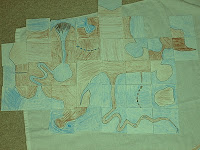 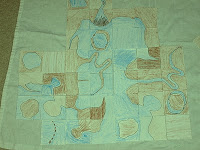 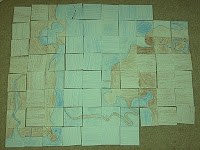 Scroll down for Stefanie's gorgeous imaginary island.
http://peacefulmanngeographylinks.blogspot.com/2007/10/montessori-imaginary-island.html﻿
Mine are just printed in black and white on cardstock and I colored them in.  I should have used marker to color them but I won't redo this material - the dc don't know any different and like them just fine.
What we are reading right now for pleasure:
The 21 Balloons

This is organic gardening in its essence: I decided to just squish all of those gazillions of aphids that we brought home from the feed store on those myrtle trees. The hose wasn't washing them off and the neem oil wasn't going to reach them all. I rubbed every single cotton-pickin' leaf of both bushes topside and underside. Then I sprayed it top and under with neem oil [teaspoon of neem oil, drop or so of dish soap, and water to make 1 quart - I use Thera Neem for garden use].

I had 2 fights with fire ants yesterday (2 separate mounds). I'm calling it a draw because they got the better of me yesterday (hand bitten by about 10 in all) but then I put some organic fire ant killer with spinosad

shown below.  I have to be victorious because one mound is at a slot between the bricks on the house and they are pouring in and out of the house, and the other is in the onion bed I was trying to weed before planting onion and garlic this weekend.