I love this kind of project.
- The dc looked over a creative Class Atlas that I made with a public school class eons ago.  It is falling apart but they enjoyed reading it.  In it each student had made up a shape island (like Cloud Island, Hand Island) along with a key, etc.  They also wrote creative stories about the people that lived on their respective island.
-We reviewed the geological forms that they know (and some we need to hone) with our cards from the land/water basket.
-We made a list of land/water forms.  They can pick but need to include 4 water and 6 land forms.  I copied the list for each of them so they could mark off and keep track of what they are including on their island.
-We made some salt dough.  Fun!  I mixed 2 C flour; 2 C salt; 1 C water.  I doubled a recipe I googled and found here.  BTW, I always try to keep cheap salt on hand for things like this... I sure don't use my Real Salt

for salt dough!
-They sketched an outline of their imaginary island on a piece of cardboard and some also drew a slightly more detailed picture on a piece of paper just to remember where they wanted to put what.
-Once they started working with the salt dough, they made a thin layer over the whole island and then began adding on top of that.
-They ended up with more than the minimum land/water forms and had a great time doing it.
-They are dry and we hope to paint them tomorrow.

Here are some pictures... if the angles are funny it's because I took the pictures while dc were still working on them (they're such good sports!). 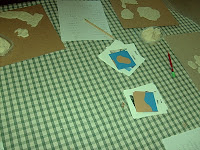 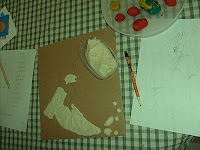 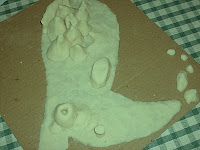 This one is an archipelago that dd made following the land/water command cards.  I took the picture to put it in her geography notebook (instead of their culture notebook - we just changed to a geography-only notebook for the olders because it's a distinct high school credit class).  You may not be able to tell but there is water in it. 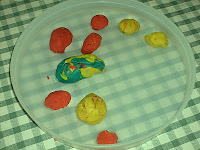 Here is a nice, succinct rundown of what is in regular commercial laundry soap:
http://www.livingthenourishedlife.com/2010/10/your-laundry-detergent-may-be-hazardous.html


I have been using Jessica's from Garden of Francis because I know I won't actually make it on my own right now.  It's all I can do to keep the food going along with homeschooling, etc.  The dc use it as well and I've been very pleased with it.  We're so use to having scented this and perfumed that that it may take you a bit to get use to the actual smell of plain freshness.  No 'linen fresh' scent.  No 'mountain fresh' scent. No 'fake chemical flowery odor that makes you run from the laundry room' scent.  Our dc work with horses and I even use it on their jeans after horse camp (I sprinkle some extra baking soda on those heavy loads).  I haven't seen any mud, horse slobber, or who knows what else after washing with this powdered soap.  Here's the link:
http://gardenoffrancis.com/index.phpmain_page=product_info&cPath=9&products_id=75&zenid=02bbcb05a0fb86a5ac17583b0be1d5f6
Speaking of soap... I've been using her plain soap bar to make liquid hand soap for pump refills and used a bar as a shampoo bar a few times.  It works fine.  I just saw that they now offer the bar soap already grated as well.  One cup of shredded soap made about a quart of liquid handsoap refill. 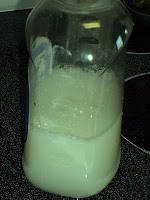 What's Cookin'?
As I type (which will be 'last night' or even 'last week' by the time I post!) I have chicken s-l-o-w-l-y cooking in the toaster oven, more chicken thighs cooking in the crockpot because it didn't all fit in the toaster oven, and in the mini-crockpot are the last 2 tiny pork chops that dh got from our new pork source discovery on our anniversary (when he got me the best gift ever - a gift certificate to a local organic farm!!!)  On the pork chops I put some garlic (mashed flat with a knife to release the goodness), dried basil from our garden, and several shakes of Real Salt

.  On the chicken in the crockpot - same thing.  I'm not very creative in the kitchen.

We had bean soup again tonight.  The thing about soup is:  It always turns out differently!  Tonight I sauteed onion and garlic in the soup pot; then put some precooked rice in there for a bit.  Since I was on a garlic/basil/salt roll I put in some basil and salt and then some pepper for good measure.  Once the onion and garlic were soft I added in the pre-cooked beans (about a pint; a can's worth, I guess) along with 1 quart of  'bean water' I saved from making the beans plus 1 quart of bone broth (deja vu? I followed the same general procedure last week with the bean juice/broth mixture for bean soup).  Since it seemed a bit plain without any snazzy veggies I put in 2 tablespoons of salsa and 5 green beans that I got from the garden.  I only have 2 plants so getting 5 was quite exciting.  [I found one later that I had missed so the guinea pigs got to share that one]  It reminded me of the oil in the lamps because we ate and ate and yet there was still a quart of leftover soup.

I know, I already talked about school :).  We're using some True Books by Tocci to correlate with our Elements Box (or rather, the other way around).  I read a book to them (or they read to me if I'm cooking or scarfing down my breakfast!), which takes about 30 minutes by the way, and then we put something in the E.Box to represent that element.  So far we have done Calcium

we put in seashells, for carbon

we put in a leaf cut from a silk flower stem.  These are the books that we've used so far:

?  I like the dark chocolate one and can usually get a bar for about $1.50 at the local grocery stores.  The chocolate chips are in some stores as well.

One bar will last a week or so for me, sometimes longer (and sometimes shorter!).
Posted by Bamboo at 9:12 AM