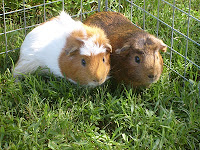 Well, this post is certainly keeping with the name of the blog. We finally finished getting the guinea pigs' permanent cage done with grids and coroplast. We switched to fleece/mattress pad bedding. We made two so we can change it out (but I'm seriously considering just making them disposible and making one a month). I read a lot about it and got the instructions on this site:
http://www.guineapigcages.com/
I'm not completely sure this will work for us in the long run but it sure looks cool! Unfortunately, when I had the sign company trim the coroplast so that it would fit in the van it was too short for the size I had planned. We had to take out a square. It's really still too small for an ideal home but it's much better than how they had been living. I built a little kitchen/bathroom box out of extra coroplast that slides into the cage. Presumable this will be easy to clean and more hygienic. That proved to be too small once we got them in because Alfalfa wanted to hog the space and not let Skipper in. Change of plans: I got a dishpan and put that in instead. The size is great but there is a little too much space on the side and they can get behind it and push it around. Otherwise it's working better than the coroplast insert - mainly because Skipper had started chewing on the first insert plus the size is perfect for them both to fit at feeding time. I'd like to try a better fitting coroplast insert though.
Here are pictures of what we made: 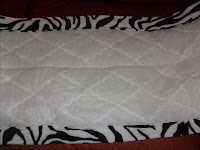 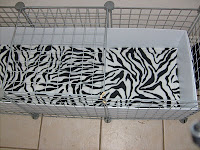 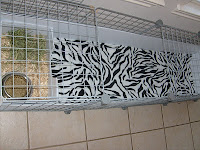 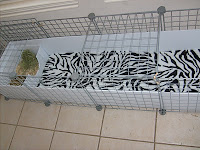 ~We're on week 3 and I can't believe that it doesn't stink! Yeah! We "poop scoop" the fleece area (usually) daily; refresh the "kitchen/bathroom" area daily (the dishpan); and change out the dishpan as needed. It still looks gross but not any worse than if it had the regular pine bedding in all of it. BTW, the bag of pine bedding says to freshen daily and change out GPigs' bedding once a month! It seems too long but here we are on week three for the fleece/mattress bedding. It seems that we've been changing out the dishpan at least twice weekly with daily freshening. The fleece really does keep the surface dry and it doesn't move around when they play tag like I thought it might.
~ I started giving them diatomaceous earth for parasites.... just in case. It's ironic that I would have these animals in the house (along the kitchen wall, no less!!) with my germ fanaticism. I've had issues with parasites in my own health (we all have them, but the ones held in check by my immune system had a great party while it was busy with Lyme) plus they gross me out, like, totally :).
Little House in the Big Woods:
~ We're done reading the book but not done with our lapbook/projects. Now we're reading the next book in the series: Little House on the Prairie. Maybe by the time we're done with the last book we'll finish our unit for the first book! Anyway, last night youngest dd and I made Molasses Candy using a recipe I found at cooks.com. I don't think it's the exact recipe from the book but it worked fine. I do NOT have a sweet tooth. Give me chips over cake anytime (unless it's chocolate cake!). I have to say, though, that this candy was so good that I had seconds and thirds - teeny tiny pieces, but still... It reminded me of the "Black Cow" candy I had as a kid. It was a mix of Black Cow and "leche de burra," a candy dh loves from El Salvador. Here is the link and a picture before I individually wrapped tiny pieces in cellophane. This batch should last all year since I cut the pieces so small. Enjoy; just make sure you suck it and not chew it!! 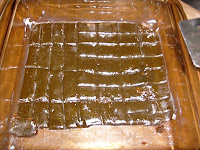 What's Cookin'?
- I cooked a veggie mix of broccoli/cauliflower/carrot in plenty butter and palm oil shortening with spices. Then I added cooked ground meat and cooked rice. When it was hot through I poured milk in to make the gravy. Since I couldn't think of a name I didn't link it to Real Food Weds. While that was simmering dd and I made the candy. 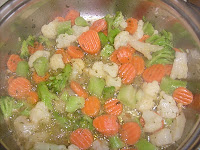 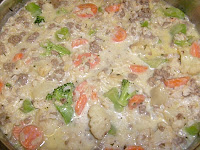 - My batch of yogurt worked again, yeah! I used the freshest milk instead of waiting to see if we had enough. It was very watery so I drained it just enough to be thick but not getting toward cream cheese. I also got a good amount of whey to use for soaking, adding to dd's almond milk (just a few drops), and drinking for my immune system.
- Usually if I have leftover oatmeal from breakfast we'll make scrapple with at a later time. I cook dallops in butter until it's lightly browned. The dc love it. Well, today is Real Food Wednesday at Kelly's blog. I found this recipe that I'll be trying next time I have leftover oatmeal - I'll plan on making extra!
http://nourishyourchildren.com/blog/2010/01/soaked-oat-breakfast-2-for-1/
- I browned 2 pounds of ground beef and got the following meals from it: the skillet meal described above; oldest dd made hamburger pizza; spaghetti (and we're having leftovers tonight so I guess that counts for 2 meals); and sloppy joes using Kelly's recipe here with a few changes served on homemade rolls [I used a can of tomato sauce instead of ketchup because we were out, was out of onion/pepper so used powdered onion, added powdered garlic].

Guess I'll go stick the sketty leftovers in the oven and work on my "zone" for 10 minutes, which happens to be the schoolroom this week. I love quick dinners :)
Posted by Bamboo at 8:02 AM