The only ingredients I used for this to feed a hungry family of 5 were stew meat, potatoes, carrots, thickener, and broth.

My cost?  About $2.50 since my mom had given me some stew meat.  Had I gotten the stew meat I would have to add $2.50+ to my cost since I still would have used less than 1 pound of meat to stretch out the grass-fed meat.  That's still only a hair over $1/person for a nutritious and substantial dinner!

The original recipe called for 3 pounds of meat and 3 potatoes.  I put such little meat that it was heavy on the potatoes.  I wish I would have put even more potatoes so we could have gotten bigger second helpings!  However, we served it with homemade wheat biscuits so no one left hungry [I guess about $2.75 if I add in the biscuits.].

Ingredients (adjust to what you have):

1 lb stew meat (I used less)(grass fed is best)
1-1/2 lb Potatoes (half of an organic bag of little yellow ones)
3 Carrots (also organic if possible; $1 for a 1-lb bag)
1/4 C Thickener (use your thickener of choice such as arrowroot; I used a bit over 1/4 C white flour;)
1 quart homemade chicken broth (I added a little more so I would not have another almost-empty jar in the fridge)
Spices/herbs of your choice

Pour about 1/4 inch clean oil in your pan ("clean" meaning non-gmo; I used sunflower).  Put the stew meat in and cook it just on the outside, turning the pieces over constantly. 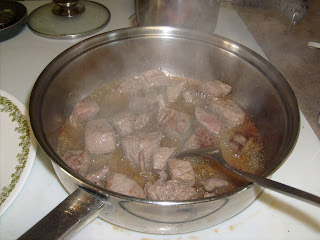 Take out the meat and put in the flour.  Stir quickly (unless you stop to take a picture!).  It will bubble. 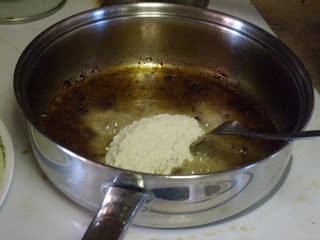 Slowly pour in the broth while stirring constantly.  I used a lot more than the original recipe called for because I wanted it to cover the potatoes I would add later plus I wanted it extra saucy instead of dry (it's much easier to boil off water than to add water later for gravies and sauces!). Put the meat back in and low-simmer (covered) for 1 hour.  Meanwhile, snatch a warm biscuit out of the oven and indulge with some butter or cheese!  You can also use this hour to cut up the potatoes/carrots, listen to music, get online, clean something, or spend time with family... (I spent it researching humic and fulvic acid but I'm funny that way!) 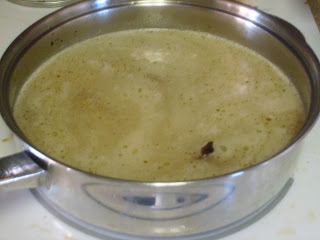 After an hour of simmering add the potatoes and carrots.  I quartered the little yellow potatoes and sliced the carrots in very slim 'coins'.  This is also a good time to add any spices and herbs.  [I added a generous amount of Real Salt , onion powder, garlic powder, pinches of basil, marjoram, and 2 kinds of oregano.] Simmer for another 30-45 minutes until tender (covered).  If it's still too watery for your preference, then continue simmering with the lid off, stirring often, until your desired consistency.  Serve immediately. 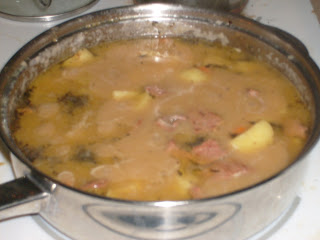 Enjoy your beef stew with biscuits (or not!).  We enjoyed out stew while watching Strike Up the Band with Mickey Rooney and Judy Garland 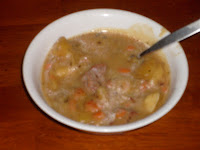 This was SO much better than the crock-pot beef stew that I scorched a few weeks ago!!

This is part of Real Food Wednesday

Any referral fees from affiliate links help to support our homeschool.
Posted by Bamboo at 9:32 AM