is my husband's favorite cookbook.  I'm not sure how much he's cooked out of it, but it's a fun read for an outdoorsy, witty sorta guy.  McManus happens to be one of dh's favorite leisure authors as well.  Unfortunately, the cookbook was stashed behind dh's snack box (dc and I don't get near that stuff full of yucky noxious ingredients!).  Something spilled on the counter and pooled back there, ruining the book :(.  Now it's on my Amazon wishlist so I can replace it for him.  I tore out his mother's inscription before dumping the moldy book.

Today we're having our version of whatchagot stew.  I did go ahead and buy 1 sweet potato and 2 organic potatoes in anticipation of stew.  Other than that I dug out the last wobbly organic carrots and that tail end of the wilty organic celery - you know, the white stalks that nobody wants to eat?  Organic celery isn't cheap and I didn't want to throw a single rib out.  The carrots are less than $1 but still... no wasting if I can help it.

Normally I would use our grass-fed stew meat but, although they are holding some for me, I haven't been able to pick it up.  I am compromising and using some stew meat my mom had in her freezer that she stashed in my freezer bag as I was leaving the other day.  At some point(s) in life you just say... we gotta eat!  It's not ideal but we're hungry!  So, to make this even better use some grass-fed beef - hopefully organic so you know it's not cloned (seriously, they are already releasing cloned meat into the market without labeling).

Once the meat and veggies were settled in the crockpot I added some spices.  Again, it begs the question:  Whatchagot?  I put in Real Salt

, pepper, garlic powder, onion powder, a dash of curry, a dash of ginger, and a sprig from our rosemary sprout.  Oh, I also added a dash of Tamari

(*fermented* organic soy sauce) to the meat before I put in the chopped veggies.

I hope this inspires you to dig around your fridge, grab those not-so-appealing veggies, and make a whatchagot stew of your own creation! 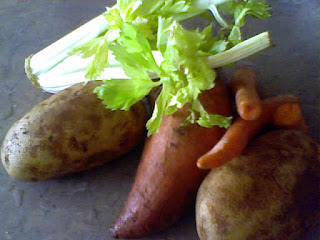 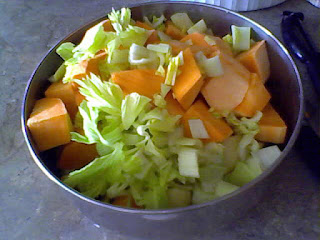 Okay, so this has nothing to do with anything!  This is a guinea hen that lives at a gas station on the way to my mom's house.  We look for her every time we stop for gas.  She'll go right up to your car door and doesn't balk at people.  Guineas aren't known for their intelligence and I'm always surprised and glad to see her!  I took it with my archaic phone so it's not the best photo.