Olive Hummus:  Middle dd (our resident hummus-maker) wasn't home to remind me how to make hummus and I was on my own (while our new little puppy scrambled around my feet in the kitchen).  So, left to my own devices I put the following in the food processor:

1/2 can drained whole black olives
1 drained can of garbanzo beans (or chick peas) [we make our own and they are sooo easy, freeze well, and are healthier; I used 1 pint jar of drained garbanzos]
2 tiny garlic cloves
Juice of 1/2 lemon
Real Salt to taste

I actually put the garlic alone first; then the olives and whirred again; then the rest and whirred until it was the correct consistency.  We don't keep tahini in the house normally (okay, I've never bought nor made it!) so we make hummus without it.  If you have some tahini, toss in a teaspoon :). 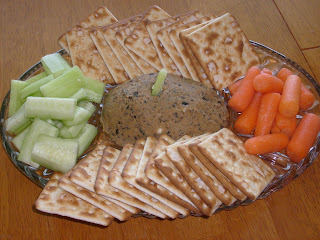 Now, if I had only remembered that I had recently posted the recipe dd uses... but then I wouldn't have come up with olive hummus, right?

This is part of Kelly's Read Food Wednesday:
http://kellythekitchenkop.com/2012/03/real-food-wednesday-3212012.html

If you are like me and like having a physical book (as opposed to a non-physical book??) in your hands, here are a few.  I know Youcat

seems to be popular right now but I plan on just getting my dc the regular one (now for the olders, later for our younger). Although, in the spirit of Montessori, perhaps I should show them both and see which they would prefer. My hesitancy is the wording of the description where it says "Developed with the help of young Catholics and written for high-school age people and young adults, YOUCAT is an accessible, contemporary expression of the Catholic Faith."

This is the binding we have:


Personal anecdote:  There was a particular doctrine which I just didn't "get."  Rather than rejecting the Church because I didn't understand, nor embrace, this particular doctrine I prayed daily for a YEAR for understanding.  Finally, it made total, complete, and (I can't think of a third adjective that means the same thing for emphasis!) sense.  As it happened, I walked through the living room just as a certain scene from one of Steve Ray's DVDs

was playing on the TV.  He was illustrating that doctrine that I had been struggling with and praying about all of that time!  Gee, if I had just shared my dilemma with my then non-Catholic husband I could have understood it much sooner!  Or... I could have watched the videos with him, eh?  I could ramble about this but I'll just say that we love Steve Ray at our house (not to be confused with Stevie Ray Vaughan!).  Perhaps I'll ramble about him and his influence on our family in another post?? :)
Posted by Bamboo at 6:51 AM