"I can tell that you've been watching the Food Network."

Yes, that's a real quote, lol.  I'm not sure if I have the right name for this side dish/salsa but it was on Food Network over the weekend. It's what we call it now, regardless :).  It's fresh and has a kick at the same time.  I just did a quick google and apparently there are quite a few different recipes that fall under "Jicama Salsa."  I can't remember the exact recipe (my hands were busy baking on my mom's oven and I couldn't write it down) but this is what I did and it was delicious:

Ingredients:
1 apple (they recommended granny smith, I used braeburn or something like that)
1/4 red onion
1 small-ish jicama
1/2 bunch of cilantro
Juice of 1 lemon
Drizzle of olive oil
Dashes of salt

Dice the apple, onion, jicama and mix together. Mix in the juice from 1/2 to 1 lemon (I used a bit over 1/2 lime since I needed some juice for the black beans I had soaking).  Drizzle olive oil and add several dashes of Real Salt

. Chop up the fresh cilantro leaves. Mix all together. If you let it sit it would probably taste better but I couldn't wait!

A. on a forum had the excellent idea of serving this over beans.  I just finished cooking up a pound of black beans. I'll just have to make another batch of jicama salsa. I still have the ingredients because I had gotten 2 small jicamas, although I dried the leftover cilantro so it wouldn't go to waste. I'll just use it dried in the recipe (pictures of the cilantro are below - I crushed it in a paper sack so it wouldn't be a big mess.  Note to self:  take off the stems *before* crushing).

For anyone not familiar with jicama - don't buy it if it looks blotchy or moldy. It should have a solid outside. I've seen stores selling jicamas that look terrible. The type I grew up with is much smaller than most I've seen in stores and had much more flavor and sweetness. I think it's better to get several small than 1 huge one but that's just my opinion.

Normally I only crave jicama when I'm expecting and eat it with lemon and salt (as well as green mango) but this recipe hits all of my palate just right. I just did a quick google and jicamas are a good source of potassium, fiber, and vitamin C. Apples are also good for fiber and vitamin C (and lots of other things), Onions have fiber, B6, folate, potassium, manganese, and vitamin C. Cilantro has thiamine, zinc, fiber, vit A, C, E, K, riboflavin, niacin, B6, folate, pantothenic acid, calcium, iron, magnesium, phosphorus, potassium, copper, and manganese. Wow - I had no idea!

For dinner we had it as a side dish but since it's called 'salsa' the youngest dd asked for some tortilla chips and we served chips on the side too. I noticed the olders just eating it as a side salad. Funny - middle dd took seconds and thirds and of course she had been the most skeptical :).

The picture of the jicama salsa is fuzzy, sorry.  The sad thing is that I thought it was in focus! 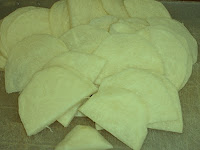 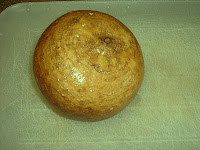 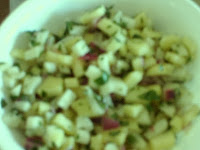 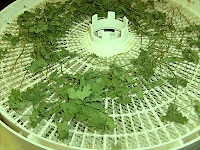 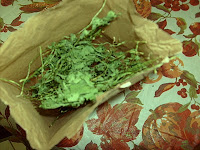 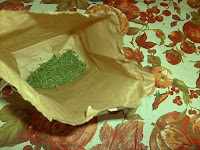 This post is part of Kelly's Real Food Wednesday at:
http://tinyurl.com/22nvcu9
Posted by Bamboo at 6:06 AM