Chemistry Cards and such 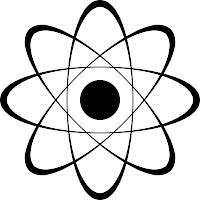 I'm currently working on next year's science plans. Why? Because it's much easier and funner than working on this week's housework, of course! Actually, this is the time of year that I'm fretting over not having gotten all accomplished that I wanted to and also fretting about the choices to be made for next year's curricula. I'd like to at least decide on the main curr before the bookfairs and before everyone sells their used curr this spring.
One dd wanted to do physics instead of chemistry next year but they need a bit more math before we tackle physics. I realized that after spending quite a bit of time on physics planning, but that work will come in handy for the next year when we *do* do physics.
As I was working on chemistry I got so excited that I thought I would share :). I'll be combining levels I and II for chemistry for the olders using Real Science 4 Kids (RS4K) from Gravitas, and youngest dd will do the labs with us plus her own thing (probably nature studies and Janice Vancleave - but that would be another post so I'll stick to chemistry right now). Along with RS4K I'll incorporate online resources and Montessori-type shelf works. That brings me to a link I wanted to share.
If you click on the quiz games you can do the matching online and uncover a picture. If you click on one of the quiz games there is also an option "for teachers-print paper version." That's the one I used to make cards for shelf work. I printed each level (gr 4-7; 6-8; 9-12) on a different color of card stock. I'll back them with self-adhesive fun foam and cut them. Then I'll label the back for the control. These cards will go in the Chemistry Box already on the shelf. You can actually print the screen with the cards but the teacher version has bigger print.
Underneath the quiz games there are some online interactive games relating to atoms, etc. Next as you scroll down are some instructional videos. The ones I saw were good and offer a variety of concepts and depth and length. We'll use these as part of Ch. 1 in RS4K.

I'm making something similar to this for them to create atoms using the Bohr Model. There are more accurate/modern models but I feel that this basic model builds a foundation for understanding those other models (it sure did for me!!). Since RS4K goes straight into the other models I want this on the shelf before we start our studies. Yes, it's been on the backburner for YEARS!! Of course, in the meantime I've lost my notes and measurements so it's like starting over (sigh). When I get mine done I'll upload a picture of mine also.
http://family.webshots.com/photo/2003011440102250446bERBhZ

I made a one-page board game for the elements today. Obviously it doesn't have all of the elements, but hopefully enough of the most common ones. It can be used in a variety of ways. At first they can just roll the die and name the element for wherever they roll. As they gain more knowledge they can also say the atomic number or whatever else you think they can tackle. Different children can play the same game with different levels. For example, youngest dd can find it and read it on the periodic table while the others can say the name from memory. Anyway, here is the link for the document. Remember, play nice: no selling my free work! :)

The control for the board game is a printed periodic table. 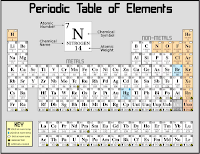 Middle dd pulled out the Periodic Table poster today during shelf work. I thought she would take out the cards that go with it, but instead she pulled out her culture notebook. She began listing the symbols (abbreviations) and the names for the elements. Since she was showing interest in it I went ahead and put the board game described above out on the shelf as well. 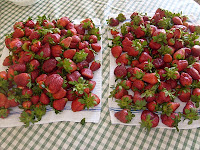 What's Cookin'?
Right now there is a roast and stew meat in the oven and some ground beef in a skillet waiting to be browned. Other than that it's just the routine almonds soaking for almond milk and yogurt that I need to make tonight. I also have a double batch of rice cooking on the stove. We need to make some tortillas (it's been a while) so I might get the dough ready tonight to make them tomorrow.

The pancake crackers last week were a big hit. They went especially well with the cream cheese that youngest made as part of our Little House unit. I used the pancake recipe in Nourishing Traditions but you could probably use any pancake recipe. Thin it out with extra water so it will be a fairly thin pancake), make the pancake (I make huge square ones almost covering the griddle), cut it into squares (I like using the pizza cutter), and dehydrate until it reaches desired crispness (or bake in a low-heat oven).
The exciting thing in the kitchen this week is that we went strawberry picking Saturday. I have tons of strawberries already washed and halved in the refrigerator. Some are already frozen as well. Dh wants preserves so I'm looking up recipes. Two problems with the strawberries: 1) they may be gone before I make jam/preserves because we can't leave them alone; and 2) we've been eating more vanilla ice cream than usual for strawberry milkshakes or to pile strawberries on top of a small bowl of ice cream!
The Chicks:
Here is a pict 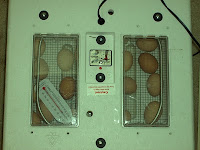 ure of the incubator and some of the chicks that I posted about in the last post. 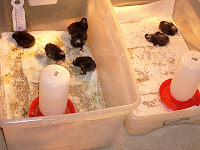