This is too cool! I've considered several ways to worm compost and although I love the fancy commercial worm tower, and really like the 2-bin worm compost we could keep in the garage, this one is just simple enough and low maintenance enough that it just may work :).
http://dfwpermaculture.ning.com/video/how-to-make-a-worm-tower
Problem: I found the *perfect* tube at Lowe's but it's pvc pipe. I don't want that sunk in my organic veggie garden, right? Dh reminded me that that's what our water supply goes through (but we also have a filter). I'll keep looking...
Lent Links:
[UPDATE: How could I forget to list our favorite Holy Heroes Lenten Adventures??
http://www.holyheroes.com/
Here are instructions for a crown of thorns. I'm considering replacing it with a 'crown cake' like we eat on 3 Kings Day with cinnamon rolls on Easter morning.
http://www.cuf.org/FamilyResources/saltdoughrecipe.asp ]
We printed one, colored it, and put it on the refrigerator. We'll move a magnet as we go along.
http://catholicicing.blogspot.com/2010/02/printable-lenten-calendar-for-children.html
She puts it in words so much better than I ever could. I especially like how she describes Lent as fasting from sin; but fasting from certain foods, prayer, and almsgiving can lead us to that.
http://churchyearforchildren.blogspot.com/
Excellent Lenten recipe ideas (I need to soak beans asap!):
http://catholiccuisine.blogspot.com/
Go to Lent/Easter:
http://www.domestic-church.com/index.dir/index_fridge.htm
We made these Stations of the Cross candles last year. I found votive candles with straight sides at Dollar General (packs of 6 for like a dollar!). I printed and cut out the designs (will look for the link to update later). Then I simply used a glue stick to put on the glass. Last year I would light and they would take turns blowing them out as we went through each station. 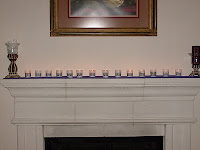 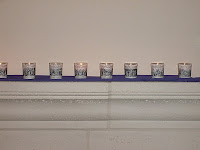 Aspartame Name Change Alert:
Another ingredient name to look for on label: AminoSweet.
Here is the reference straight from the horse's mouth (so to speak) regarding the new name:
http://www.aminosweet.info/about/about.asp
Here's an interesting article:
http://dorway.com/dorwblog/contest-to-rename-aminosweet-aspartame-lets-call-it-what-it-is/
Have you ever heard of Neotame? Me neither. Not until the above article. Here is an article about Neotame from the Feingold:
http://www.feingold.org/PF/neotame.html
What's Cookin'?
- Last week we had "Breakfast Cookies" for breakfast. I doubled the batch but used 1/2 the ratio of the honey and used milk instead of the buttermilk (and soaked overnight). I didn't use the whole ratio of peanut butter because I'm stingy and didn't want to use it all up in one recipe. I'm still waiting for the poster's permission to post the recipe... 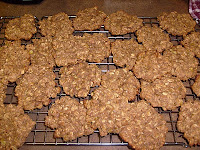 - Here's a picture of the last batch of bread. I have some more dough in the refrigerator and can't decide whether to just make bread or do something else with it. We're coming up on the weekend so I may use some for cinnamon rolls to keep the donuts out of the house :). [update: I wasn't fast enough and the donuts made it into the house although I froze the leftovers] 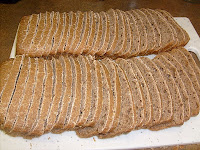 - I made beef stroganoff using this Rachel Ray recipe. I had already cooked some stew meat so for that part I just sauteed it a little for flavor before adding to the gravy directly. Then I spooned it over the noodles. I just happened to have made beef bone broth the day before (I usually only have chicken) so that worked out well! I like creamy so I substituted part of the liquid for some milk I needed to use up anyway.
http://www.foodnetwork.com/recipes/rachael-ray/beef-stroganoff-recipe/index.html
Our oven went out last Thursday. I lost a batch of granola bars, a batch of cereal, the breakfast oatmeal bake, and a batch of pumpkin breakfast cookies I was trying. Plus no baked bread so I got a couple of loaves of Ezekiel. I got the bran one (no soy) and the 7 sprouted grain one (no soy)(although it has sprouted corn - not sure if the sprouting would have neutralized the toxins or not; we'll see...). I tried baking a couple of things in the toaster oven but it didn't turn out too well and ended up dumped :(. A friend has lent me an electrical roaster oven so I'll be able to do some baking. [Thanks!]
What's Schoolin'?
-I have spent the last couple of weeks thoroughly obsessing over history curricula. [I guess 'thoroughly obsessing' is redundant - does anyone ever half-heartedly obsess?] I started making a post listing them all with links but that will have to wait and may not be as detailed as I'd like.
-On another note, as part of our slavery studies we've been reading The Journey to the Bottomless Pit. Now I really want a cave field trip! Spring Break, maybe? I should put some Earth Science works out; but I'd have to make them first... Hmmm...
Shelf Work photos:
This is a shell sort dd did today. You sort shells into bivalve/univalve. 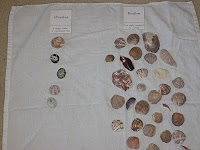 The other day dd make these molecules from a kit in the Chemistry Box and then self-initiated sorting them into poisonous/non-poisonous: 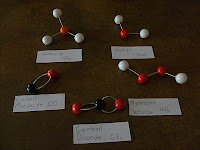