Quote of the Day

Don't worry, it's not a political blog (even though I'm very opinionated on the subject) but I just couldn't pass this up.

Barney Frank: "We Are Trying On Every Front To Increase The Role Of Government"

Here is a video clip. He speaks quickly so you have to really pay attention to catch it. Gee, at least he's being honest. If you don't know who Frank is or what he's done in the past he had a major role in the fiasco of Fannie Mae and Freddie Mac.

Here it is in a nutshell. I found this synopsis in the Wall Street Journal. It's short and worth the read. Here is a quote from the last paragraph:

"Mr. Frank has had many accomplices from both parties in his protection of Fan and Fred. But he was and is among the most vociferous and powerful..."
http://online.wsj.com/article/SB122091796187012529.html

And yet, the saga continues. After all that's happened he is STILL pressuring Fannie Mae and Freddie Mac to loosen its standards for some risky condo loans. This is from this year, after the bail out:
http://online.wsj.com/article/SB124580784452945093.html

Now back to our regularly scheduled topics... :)

Ack! I killed my sourdough starter! (sob!) Life has been so crazy the last few weeks that it's been neglected on the counter. I keep it on the counter because we make it so often... or rather *made* it so often. The water kefir is not looking so good either. It's probably vinegar right now. I'm off to put on my cape and try to save it before it's tooooo late.

On the upside we just made some non-NT animal crackers for 4-H this afternoon. Since I was so exhausted last night I didn't soak anything and didn't change anything in the recipe today. It is from a children's cookbook called Kinder Krunchies put out by Discovery Toys. It sure would have been easier to grab some crackers off the shelf at the store (sigh) but even though it's not NT I know there are no trans fats, excitotoxins, etc, etc. I quadrupled the recipe. 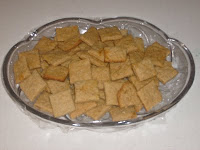 Notes: I didn't have butter milk so I used half yogurt/half milk for the buttermilk portion. The first time we made this, maybe a year ago, we tried using animal cookie cutters and it didn't work very well. I just scored it in squares with a pizza cutter before putting in the oven and that worked really well. Oh, I added a little bit of cinnamon but not enough - you can't taste it.